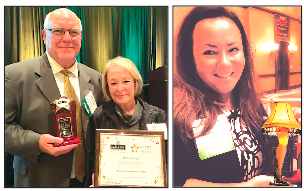 Gabrielle Barnett, the marketing director at Lucy Buffett LuLu’s in Gulf Shores, and Herb Malone, president of Gulf Shores & Orange Beach Tourism, were named winners of the Tourism Promoter of the Year Award during the Alabama Restaurant and Hospitality Association’s (ARHA) recent annual awards dinner honoring the restaurant, lodging, and tourism industry.
The awards are peer-nominated and winners are selected by ARHA’s board of directors from among more than 80 nominations.
Born and raised in Gulf Shores, Barnett has always had a heart for promoting the area and state and done so through her work with LuLu’s and in the tourism industry for more than 14 years.
In her tenure at LuLu’s, she has worked with Alabama Tourism, and Gulf Shores-Orange Beach Tourism, promoting everything from Year of Alabama Food, Music in Alabama.
She has produced promotions to bring tourists back to Pleasure Isle following the Deep Oil Horizon Oil Spill, helps promote Coastal Cleanup every year and has organized numerous fundraisers.
She was on the Governor’s Conference on Tourism welcoming board, and has helped turn LuLu’s into a thriving destination restaurant.
She has hosted travel writers, bloggers and influencers to help spread the word about the Alabama Gulf Coast and was recently selected to represent Alabama Tourism at the Travel South International Showcase scheduled this December.
Barnett earned a masters in Public Administration from Troy University and is a member of the Kiwanis Club, Pleasure Island Junior Women’s Club and the National Shrimp Festival Committee.
She spends her life promoting our restaurant, area and State.
For more than two decades, Malone has been a guiding force in the tourism industry along the Alabama Gulf Coast. He served as president/CEO of the Alabama Gulf Coast Area Chamber of Commerce from 1988 to 1993, working to recruit both businesses and guests to the area.
As the need for a destination marketing organization developed, Malone played a key role in the establishment of the Alabama Gulf Coast Convention and Visitors Bureau (CVB), which is now known as Gulf Shores & Orange Beach Tourism. He has led this organization as president/CEO since 1993.
The tourism and hospitality industry honored his work in 2000 by inducting him into the Alabama Hospitality Hall of Fame. Then in 2001, he was named the Alabama’s Tourism Promoter of the Year and four years later in 2005, Herb was honored as the Alabama’s Tourism Executive of the Year.
“The Stars awards dinner is our chance to recognize those who have demonstrated excellence and serve as an inspiration to others in the restaurant and hotel industry and our community. On behalf of ARHA, I am proud of the members we have and the outstanding accomplishments they make day in and day out,” said ARHA President Mindy Hanan.
Pictured: Gabrielle Barnett, Herb & Bessie Malone.

A portion of the proceeds from the awards dinner went to the ARHA Foundation whose mission is the promote education in the restaurant and lodging industry.
The Alabama Restaurant and Hospitality Association is the state’s largest trade association representing the lodging, food service, and tourism industries. ARHA offers members lobbying support on legislative issues, money-saving benefits, information-services and training aids.