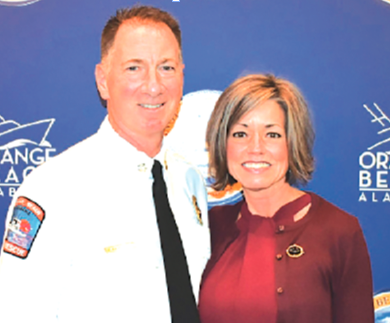 Those of us who think about retiring on a beautiful beach probably have visions of offshore fishing, boating, swimming, sunbathing and daiquiris. In much the same vein, Orange Beach Fire Department Chief Mike Kimmerling intended to retire here in Orange Beach after many years in Bloomington, Illinois, so that he could surf, bike, swim and boat.
“I’m too active — I got bored,” he said.
His wife, Beth, found out about Coastal Resources Director Phillip West’s “Beach Ambassador Program” (technically known as Environmental Service Technicians or EST). Kimmerling reached out to Phillip back in September of 2017 to express an interest in working on the beach. West explained that it was a city job, and Kimmerling said, “Wait, you’re going to pay me to drive a jeep along the beach? I was ready to volunteer!”
Kimmerling was born in Bloomington, Illinois, and he built a life there before heading south to “retire”. He attended some classes at Illinois State University, got his paramedic certification, and was offered a job with Bloomington Fire Department after taking his very first Fire Department exam. He progressed all the way up to Fire Chief.
His wife of 20 years, Beth, is originally from Massachusetts and has worked as a coroner and registered nurse. They have two daughters — Rachael and Morgan. Rachael is 28 years old and works in marketing in San Diego, Calif. Morgan is 26 years old and is a middle school teacher in Illinois.
Kimmerling said that he and Beth always talked about leaving Illinois and they said when they had the opportunity, they would find a place they would love to call home. He remembered enjoying his parents’ condo in Clearwater, Florida, as a child, and, as luck would have it, they learned about the Perdido Key area while watching the HGTV television show, “House Hunters”. They visited Orange Beach during the Fourth of July holiday, and moved here on Veterans Day 2014.
Kimmerling said that while he was working as a beach ambassador, he got to know Fire Chief Justin Pearce. Pearce offered him a position as Battalion Chief, but Kimmerling said he knew his wife wouldn’t appreciate his going back on shift work. One day in the City Hall mailroom, City Administrator Ken Grimes ran into Kimmerling and knew of his background as a Fire Chief in Bloomington and asked if he would be interested in reviewing some bid specs on a new firetruck. From that interaction, Grimes kept his mind on Kimmerling and ultimately was successful in bringing the position of Deputy Fire Chief back into the mix. Chief Pearce offered Kimmerling the opportunity to become Deputy Chief in January of 2018. Kimmerling just couldn’t refuse.
He said he was drawn back into the Fire Department profession because he “likes to be the calm in the storm — when people have a problem, we solve it and we make things better.”
Kimmerling explained that now in his role as Chief, he enjoys working with the department’s employees and helping the community.
“I love to look at the potential of our employees here,” he said. “They are bright and motivated. With a little bit of guidance and praise, they can do anything.”
He said that every day he comes to work, he has three goals. One is for everyone to go home safely. Number two is to provide outstanding service to our community. And last is for everyone to enjoy coming to work.
“We are dedicated to the community, the profession and each other,” he explained. “It’s about pride, integrity and honor — we uphold that everyday. We must make decisions based on what’s best for the group as a whole, and not for the individual.”
The community has treated him well and he’s happy to give back to Orange Beach, he said.
“I didn’t have to come back to work, but the people here care and I’ve been treated with courtesy and respect,” he said. “It’s a service profession and I’m here to serve.”
Pictured: Mike and Beth Kimmerling.