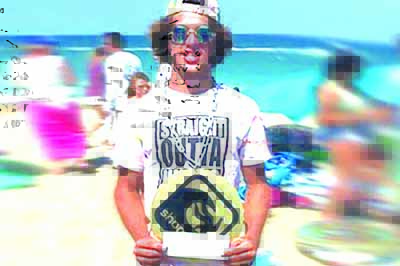 17 year old Gulf Shores native Mason Broussard takes pro skim boarding title
Although Mason Broussard is a mainstay on the Gulf Shores High School basketball team, the Dolphin junior’s talents truly shine in a sport where his practice sessions take place about a mile to the south of The Tank, on the edge of the Gulf of Mexico.
The 17 year old has won a room full of trophies since he first started competing in skimboard tournaments at the age of 8. And he reached a new pinnacle in his sport by claiming the Men’s Pro Division at the recent Single Fin Showdown in Stuart Beach, FL.
Mason had claimed the semi-pro in three different tournaments before moving up to the pro division for last month’s Shore LB Throwdown. The lifelong resident of Gulf Shores is the first Alabamian a to win that title.
Mason started skateboarding at the age of four and has been able to incorporate many of his skateboarding tricks into his skimboard routines. He has competed in skimboard tourneys all over Florida as well as North Carolina, California and Delaware.
Mason also excels at the Florida Crossover Championships, an invite only competition where competitors skateboard, skimboard and surf (at Disney’s Typhoon Lagoon). He will defend his Crossover title in Vilano, Fl. later this summer. Although skateboarding and surfing are already Olympic sports and many think skimboarding will soon be, Mason is not sure where the sport will take him beyond this summer’s competitions.
Sponsored by Zap Skimboards, Waterboyz, and RDS, Mason competes with the Skim USA and United Skim Tour teams. He offers skateboard and skimboard lessons to help facilitate the travels to and from his contests. Anyone interested in lessons, please email mbroussardss2@ gmail.com or call 251.223.3563.