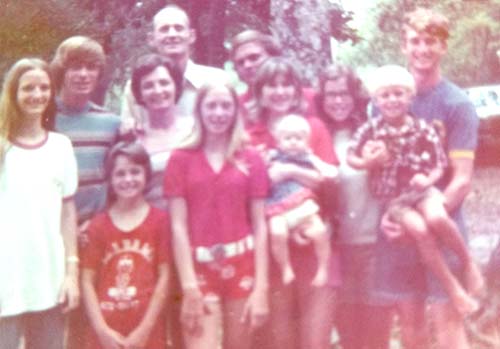 By Laura Lloyd
In 1964, brothers Joe and Tom Jones moved their families from Mobile to Bear Point. They had already built a beach house around 1957 on the water at the end of Bear Point Ave. on North Bayshore Dr.
And in 1964 they purchased Macs Variety store located at the corner or Green Tree and Canal Rd. The house at the corner of Holly Lane and Canal Rd. was included in the purchase. The stores name was changed to J & J Variety. Tom and Loretta had six children and Joe and Flora had two, so there was plenty of help to run the store.
The store sold groceries, hardware, dry goods, gas and had a laundry mat. J & J furnished part time residents with fresh well water and the stores phone number was shared as an emergency contact for many vacationers. If we received a call we would go to that person’s cottage and let them know what the emergency was.
People often speak about getting to walk to the store for ice cream and candy when they were children. At the time Orange Beach was a small charter boat fishing village, but during the winter there wasn’t much fishing. So, the families would have a hard time making it through until spring break.
The Jones would allow many of the families to charge their necessities until they started fishing again.
Mrs. Mary Gene Walker once told Laura, “I don’t know how we could have made it without your dad and uncle carrying us through the winters. God Bless them.”
Tom poured a concrete slab with a basketball goal and juke box so the local kids could enjoy good clean fun. It became a very popular hang out and was nicknamed the Flab Slab. The most popular songs on the juke box were “Little Red Riding Hood” and “Red Rubber Ball.”
The Jones’ owned the store for 12 years before selling it in 1976 after Tom’s passing in 1973. Joe moved away, but Tom’s widow Loretta stayed in Bear Point. The store was run by several different people during the following years before, sadly, burning down in 1992.
Loretta started her own business, the well known Jones Canvas and Interiors (pictured). It also was a family business with her son, Pat Jones and daughter, Laura Lloyd operating the shop.
Jones Canvas was a fabrication shop, making biminis, boat enclosures, cushions, the interiors of yachts also drapes and bedspreads for homes and condo’s.
People would come from all over to have work done by Pat Jones. He was the best at his trade. Loretta and Laura did the home and yacht interiors. As most of the Orange Beach and Bear Point residents know, Pat Jones passed away in February of 2008 and Mrs. Loretta in July of 2017.
Laura continued operating the interiors portion of the business until now. She will close the 33 year old establishment this month. But she will continue managing the boat storage facility.
But there is no need for sadness. Laura’s nephew, Capt. Davey Jones (Pat’s son), will be facilitating the building for his new venture, Jones Marine Service.
In response to a notification the company sent out to the many decorators Jones Interiors has done work for, Brenda Johnson, owner of Biscayne Interiors in Gulf Shores (no longer in business) said, “There will be a void left in this community for a great workroom. I can’t imagine the number of homes, condos and boats that have received quality items from Jones Canvas over the years.’’
Pictured: The Jones family, circa May of 1973: Laura Jones-Loyd, Pat Jones, Suzi Jones, Loretta, Tom, Butch Golden, Kathy Jones Fleming, (Brenda Jones Golden holding Linda Golden), Connie Jones, Mike Jones holding Kelly Golden.