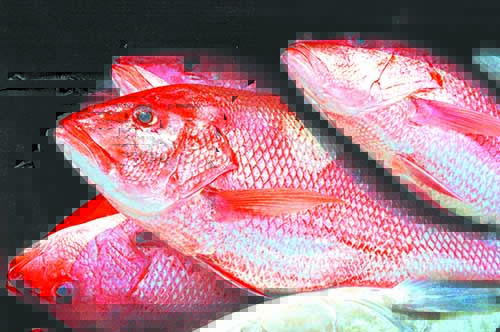 2 more days of red snapper fishing expected in the fall
By David Rainer
Al. Dept. of Conser. & Nat. Resources
Just when it appeared that the 2020 red snapper season was a wrap, private recreational anglers are likely to get one more opportunity to fish this year.
Scott Bannon, Director of the Alabama Marine Resources Division (MRD), said the preliminary harvest numbers for the private recreational sector indicate about 100,000 pounds remain in the quota of 1,122,622 pounds.
The red snapper season for private recreational anglers (which includes state charter vessels) was originally set to last 35 days, beginning the Friday of Memorial Day weekend. However, the season had to be shortened to 25 days to ensure the quota was not exceeded.
Bannon said he and Chris Blankenship, Commissioner of the Alabama Department of Conservation and Natural Resources, are discussing options that would provide the best opportunity for private anglers to catch Alabama’s premier reef fish species.
“The private recreational angler season went really well even though we closed a little earlier than we anticipated,” Bannon said. “The data showed a tremendous number of people took advantage of the season, especially with the opening earlier on May 22.”
When the data from the season was analyzed, Bannon said a significant uptick in participation was quickly evident.
“The average vessel trips for the season were 713 trips per day,” he said. “That means a lot of people went fishing compared to the last two years, which had an average of about 530 vessel trips per day.
“I think people took advantage to go snapper fishing when they could not participate in other activities. They could not get on cruise ships. They couldn’t go to Disney. People were not playing travel sports. Boating was considered a safe outdoor activity, so I do think the COVID-19 pandemic affected the snapper season. I think it prompted more people to go snapper fishing than we had in the past.”
Bannon said the snapper season might have ended even a little earlier had it not been for Tropical Storm Cristobal, which significantly limited fishing on the third weekend of snapper season.
“Even after the second weekend, I had people tell me about the high number of boats they were seeing offshore,” he said. “They said there’s no way we’re going to make it to July 19. My thoughts were that as the season progresses the fervor dies down in July, and fishing gets a little tougher. Again, with not having other activities available, the weather outside that Cristobal weekend was really good and people went fishing.”
Bannon said anyone interested can visit outdooralabama.com/2020-red-snapper-landings-summary and view the catch data as well as the chart that shows the angler participation rate compared to the average wave height. The catch data in the chart has been updated to include additional reports.
“You can see in the chart that the wave height and catch effort are directly related,” he said. “The Cristobal weekend slowed down the catch effort. You can also see the weekend days had much higher catch effort.”
For the first time since the five Gulf states were granted control of red snapper management in 2018, Alabama added Mondays to the weekend to try to spread out the effort and provide more opportunities to fish.
“I think adding Mondays was a success,” Bannon said. “Some people felt that had a negative impact and reduced season length because of the Monday fishing. But if you add up all of the Monday effort, it is barely more than our peak Saturday. Mondays did exactly what we hoped it would do. It provided opportunities to avoid the Saturday chaos, allow people who work weekends an opportunity to go, and allow people who were on vacation who had to travel on Saturday to have an extra opportunity.
“And, if you were local, the feedback I got was they took advantage of Mondays instead of trying to fish on Saturdays when the effort was so high. They didn’t fish any more because it was open on Mondays; they just fished a different day.”
With the snapper season closing after July 3, red snapper had to be replaced with lane snapper for the 87th Alabama Deep Sea Fishing Rodeo at Dauphin Island later in July.
“I know there was disappointment that we didn’t have red snapper for the Alabama Deep Sea Rodeo, being the nation’s largest fishing tournament,” Bannon said. “With all of the other challenges the rodeo had with the COVID-19 issues and all the events that were cancelled, I think they had the best event they could under the circumstances.”
With three years of state management data and the 2020 data on Monday fishing, Bannon said the MRD staff will analyze those numbers to determine season dates for 2021.

“Our goal is to make accurate season predictions,” Bannon said. “Again, the pandemic did have an impact, and we don’t know where we will be next year with COVID. We will work with the Commissioner to see what kind of season we will have moving forward.”
The other sector that takes advantage of the state’s great red snapper fishing is the Alabama charter boat fleet, which still operates under federal management through NOAA Fisheries. The charter season opened on June 1 and ran straight through August 1.
“I think the charter season went really well, especially considering that, when the coronavirus first hit, a lot of people were canceling trips early in the year,” Bannon said. “As boating was considered a safe activity, many of the boats adjusted their capacity so people felt comfortable and safe. They lost the Cristobal weekend just like everyone else, but they got to fish pretty consistently for the 62 days they were open. From my discussions with the captains, they considered it a very good season considering the COVID circumstances.
“And I think they’ll have a good fall season as people still have limited outdoor activities. The charters will target other fish, like amberjack, which is scheduled to be open until October 31. They can also catch vermilion snapper (beeliners) and other reef fish species as well as king mackerel.”
Bannon was encouraged by the variety of sizes of red snapper that inhabit Alabama’s unparalleled artificial reef zones.
“We saw in our preseason data that we had a large number of smaller fish, which we attribute to a strong year-class of fish,” he said. “Those younger fish will crowd those reefs. What you should see in the next year or two, those fish will be growing up around those reefs and then dispersing. We should be able to follow the year-class and see how it works out over the next few years.
“We are comfortable with the amount of fish harvested in our reef zones from all sectors. Our surveys help ensure we are making appropriate management decisions to make sure our fishery is sustainable.”
One of the ways MRD conducts those surveys and other management practices is through a variety of funding sources, one of which is the Gulf Reef Fish Endorsement that was implemented for the 2020 season. Bannon said 22,755 endorsements were obtained. The funds will be used for reef fish management.
“I feel like we had really good compliance on the Gulf Reef Fish Endorsement,” he said. “This year, our Enforcement Officers were just making people aware they needed the endorsement, which helps us identify just how many people are participating in the fishery in addition to providing funding for all aspects of reef fish management. Next year, a person may receive a citation for not having it.
“Also, for the fishing seasons after January 1, 2021, we’re adding greater amberjack and gray triggerfish as mandatory species for recording in Snapper Check. They are two valuable species to Alabama anglers, and we want to develop better landings data.”
Pictured: The Alabama Marine Resources Division determined about 100,000 pounds of red snapper remain in the 2020 quota and plan to extend the season by one or two days this fall. The planned 35-day season was cut short because of the increased number of boats fishing for Alabama’s premier reef fish.