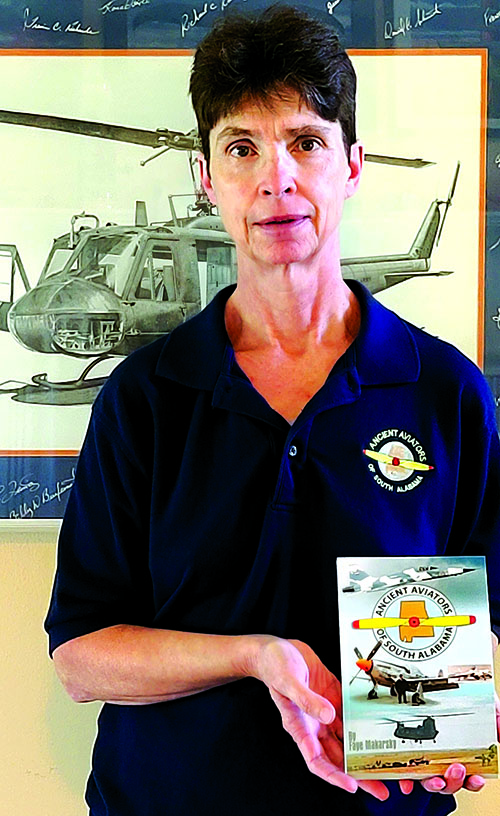 Faye Makarsky tells the stories of local Ancient Aviators
By Fran Thompson
Retired Army Major Faye Makarsky introduced her just published book profiling members of the Gulf Shores based Ancient Aviators Club of South Alabama during the club’s August meeting at American Legion Post 44 in Gulf Shores. (The group meets the first Tuesday of each month).
Makarsky, a Mobile native who attended South Alabama on an ROTC scholarship, considers herself fortunate that her dream of flying became a reality in 1977. Her 30 year career in aviation included a stint leading the Texas National Guard Chinook Company and 11 years with the Federal Aviation Administration
Like most in her group, she appreciates exchanging stories in the company of others who, like her, love the sound of aircraft engines and the smell of aviation fuel.
It was with that in mind that she started the project that led to the publication of her book, The Ancient Aviators of South Alabama, which rehashes memories from 30 club members, including herself, over the course of 228 pages. Six of the men she profiled passed away in 2019.
Imagine sitting in a room with a 102-year-old man who could still describe every nut and bolt on a T-34 (Len Cobb), a man who flew The Hump (Bob Clifford), a man who had to bail out of a C-46 over the mountains of Korea (Ivan Turner), an Imperial Iranian Air Force colonel who barely got out of the country with his life (Cy Farrah), an air traffic controller who spent his career helping pilots get out of dangerous situations (Clay Steinacker), a man who flew an experimental helicopter into North Vietnam (Dan Smith).
Makarsky recorded those stories and many others simply because she believes they deserve to be chronicled. If she didn’t do it, who would?
“I asked many of them if they ever talked to their kids or grandkids about what they did. ‘No,’ they said. How sad it would be to lose these stories,’’ she recalled.
She started interviewing club members for her book in September of 2017, a month after moving to Gulf Shores from Oklahoma. It was made available on Amazon just last month.
“People ask me why did it take four years. Well, it’s next to impossible to get a bunch of mostly 80 year old men to sit down and talk between bowling and golfing and fishing with their grandkids, plus doctor’s appointments thrown in there along the way,’’ she said.
The author, an English major who had previously edited aviation manuals, said every single one of the men she interviewed made a point that will stick with her, as will some of the stories that were told off-the-record during her interviews.
She said she especially enjoyed hearing a story from Chris Haines about lying about his age to get a student pilot’s certificate only to have his mother inadvertently spill the beans during a chance encounter with Haines’ commander, who determined he could not even officially discharge him from the Navy Reserve because he was too young to officially be there in the first place. Haynes would go on to have a highly decorated aviation career.
Makarsky said she put the stories in writing to let more Americans know what they went through to ensure that our country remains free.
The book will also serve as an example that those with determination, drive and the will to succeed can make their ambitions a reality, noting that several of the men profiled did not realize their dream to fly until later in life.
It wasn’t always easy scheduling times at coffee shops or their homes around town and around schedules.
“Have you ever tried to chase down a retired guy? They stay busy,’’ Makarsky said. “I’m not tech savvy and really don’t care to sit too long at a computer. If it doesn’t do what I tell it to do, it may be days before I try again.
“I have simply put their words on paper. You cannot make this stuff up. I am extremely proud of the book and I hope the guys in the book are proud of it,’’ she added.