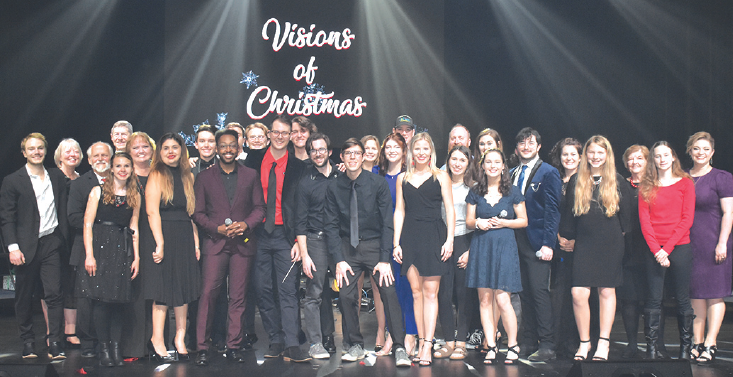 The arts community of Pleasure Island has received a major shot in the arm with the completion of the Orange Beach Performing Arts Center. While there has already been one show at the P.A.C., “Frozen Jr. – The Musical,” a student production presented by Orange Beach High School, the official Grand Opening was the Nov. 16 open house.
“Visions of Christmas” is set for Nov. 17-18 at 7 p.m. and is the first Orange Beach Expect Excellence production at the P.A.C., located adjacent to Orange Beach Middle/High School on Canal Road.
The P.A.C., a joint project between Orange Beach and the Baldwin County School System, is the result of almost four years of planning and construction.
“I teared up a little bit. This really is such a state-of-the-art facility. I think it’s something that everybody in Orange Beach can be proud of for years to come,” said Annette Mitchell, Orange Beach City Council liaison to the Performing Arts Center.
The land for the 710-seat P.A.C. was donated by the city. The construction of the facility was funded by both the City of Orange Beach and the Baldwin County Board of Education, with the city and school sharing ownership of the building.
“We have a cooperative agreement with the school, that says, during the day it is theirs to use, and after five o’clock during the week and on weekends it’s ours to use,” Mitchell said. “It’s really beneficial for both of us.”
The P.A.C. wills be the performance venue for the Orange Beach Expect Excellence Community Theater, Expect Excellence Music Department and other community events.
“We will be able to teach our school children all aspects of theatre production and performance, while also providing quality, family-friendly entertainment to our residents and guests. Live performing arts are one more amenity we are able to add to our quality of life in Orange Beach,” Mitchell said.
Auditions for the next Expect Excellence Community Theatre production were recently completed and “Thoroughly Modern Millie” will go off Feb. 4-6 and Feb. 11-13. (Tickets orangebeachal.gov).
The 28,000-square-foot facility also includes an orchestra pit, a 200 feet black box theater, and a multi-use band room for the high school.
The city first agreed to pay $7.2 million toward the cost of the Performing Arts Center and in June of 2020 added funds to increase the capacity of the women’s restrooms. The initial cost of the center was estimated at $8.6 million with the Baldwin County Board of Education paying $1.4 million of that cost. The additions will push the final price to around $11 million.
Orange Beach Mayor Tony Kennon said the new center at the school will serve many functions for the city and the school.
“This is not just for the kids. This is going to be for the parents and the community in a lot of different ways,’’ Kennon said. “Essentially, after school and weekends, it’s ours. That’s the way the contract reads. We’re going to be bringing in country acts, maybe bringing in comedians, doing plays. All those types of things. And the school has use of it as well.”
Pictured: The Visions of Christmas cast.