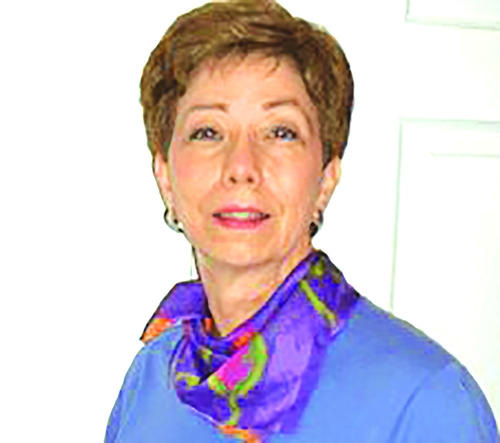 Foley resident Kathie Farnell (pictured) will sign and sell copies of her book Tie Dyed: Avoiding Aquarius during intermission of the May 21 dinner theatre presentation of Three Hours of Peace and Music, a Woodstock-inspired live music show, at The Sunset Cork Room in Gulf Shores. The event begins at 6 p.m.
The book is described as a hilarious account of Farnell’s high school and college years in Alabama during the sixties and seventies. With wry observations, excellent portraits of family and friends, and a willingness to laugh at herself, Farnell weaves her own experiences into the larger historical and cultural context of a world being turned upside down by racial, sexual, gender, and political revolutions.
Farnell, a Montgomery native, has also produced radio and television programs. Her first radio project, Remembering Slavery, won the Gabriel Award. And her memoir Duck and Cover: A Nuclear Family, released in 2017, was featured at the Southern Festival of Books and on C-SPAN’s Book TV.
Synopsis of Tie Dyed: It’s the late 60s and Kathie has a wardrobe problem: her mother doesn’t think her skirts are short enough. Meanwhile, at enormous Sidney Lanier High School (football team: the Poets), the administration is ignoring the fact that somebody has planted marijuana in the library’s ficus, and the official response to integration is to announce that students will no longer shower after PE. Kathie has PE first period. Do the math. On the home front, Kathie’s brothers have started a pot plantation on the carport roof and Granny, though dead, is in no hurry to vacate the premises. What a relief to escape to small University of Montevallo, suspended in Jello since the 1950s, where there’s no violence on campus and not much of anything else, either. Kathie may be missing the whole flower power vibe, but she stays pretty busy coping with hippies, Miss Poultry, and Jeb Stuart Magruder, not to mention answering all those Star Trek letters. More info: 251-943-2367 or farnell@centurytel.net
Admission to the Peace & Music show is $20 at the door and reservations are suggested (251-967-4773). Please feel free to let your inner hippie shine and dress the part. Cork Room staff will serve drinks and dinner throughout the show features live music with Lisa Christian, Congo Dave, & The Bitter End Band.