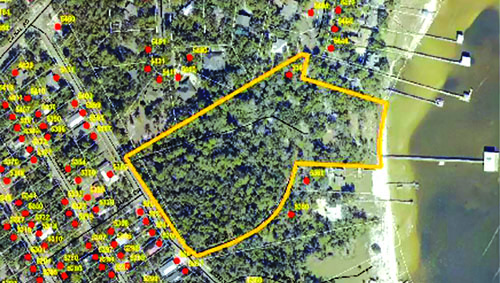 27 lot Bear Point subdivision finds little opposition at public hearing; Mayor promises city will address flooding issues in other parts that neighborhood
By John Mullen
Orange Beach seems poised to give the go-ahead on a 27-lot subdivision (pictured) on the tip of Bear Point and east of Mississippi Avenue.
A public hearing on the subdivision during the July 6 joint council-work session drew no dissenters from the audience even though there was contention about the subdivision when it was first proposed. Mayor Tony Kennon met with residents on the site on a recent Saturday morning in an effort to explain what the city can and can’t do about developments.
“It’s not a plan that allows anyone something more than they should have but it’s a better plan to create a better project,” Kennon said.
Also, during the meeting, Kennon addressed concerns about flooding in Bear Point after the July 6 heavy rain.
On the Mississippi Avenue project, developers are asking for a planned unit development which is essentially an ordinance change to allow them to slightly bend zoning rules for residential developments. Building by-right, or within the zoning laws, would also only mean 27 new homes in the subdivision.
Only about four or five of the lots will be smaller than the required 9,000 square feet and most far exceed it. It will be a gated community and the homeowners will be responsible for maintaining roads and rights of way. It will contain a common area for residents, a community pier and three lots will be waterfront and be allowed to construct piers. Most of the homes planned there will have four bedrooms.
A concern was raised in the June Planning Commission meeting on the PUD about ample parking and the developers agreed to include 22 spaces for overflow parking. The PUD received a 7-0 favorable recommendation from the Planning Commission. The council has to have final say on any ordinance changes.

Bear Point Flooding
While it didn’t seem like a heavy rain event in most parts of Orange Beach, Bear Point received a deluge during the early morning storm.
“Whereas we received three inches here at city hall, Bear Point received anywhere from six to eight inches in a very short period of time,” Community Development Director Kit Alexander said. “It was a significant rain event even though it didn’t seem that way here. They got a lot of water.”
Some of the pumps failed and some were blocked with trash and houses in the area of Low Drive and Mobile Avenue were threatened by rising waters.
Kennon said the city would immediately start looking for a fix in the area.
“We’re going to put our heads together and upgrade the pump system and hopefully find some grinder type pumps,” Kennon said. “The pumps continually get loaded up with trash and burn out. Hopefully we can find some kind of grinder system to minimize the trash and flush it through, upgrade and shoot some grades and realign those for a better flow volume. We are immediately getting on the problem and hopefully if parts don’t back up, we’ll get it done as quick as possible.
“The pumps aren’t cheap but drainage is our job. We are on it.”