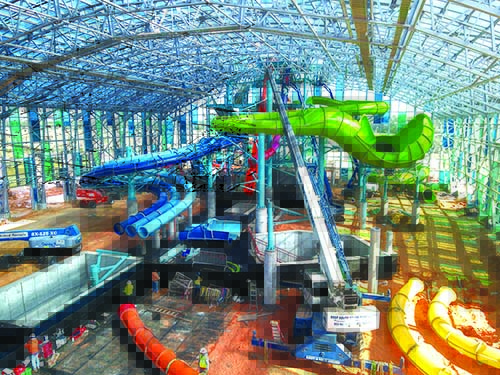 $74 million indoor water park will open at OWA this May
A $74 million indoor water park will open at OWA this in May in an area of the Foley destination district that will now be branded Tropic Falls at OWA and include the entertainment resort’s signature amusement park.
With the new addition of the waterpark, now a single gate admission ticket can be purchased for multiple attractions. Tickets and pricing information for the new waterpark will be available this Spring
The indoor water park will be a year-round attraction and include 11 slides, a lazy river and a children’s area.
The 65,000-ft building will be the first in the entire country to include a retractable walls and a retractable roof, according to OWA officials.
Some of the slides will have loops that extend outside the walls, and one, aptly named Tangerine Scream, will have a 75 ft. vertical drop. Another notable slide is Piranha Plunge, a 75’ super loop with a drop floor.
with a drop floor.
The water park complex will also include a restaurant and retail area, a concert stage, a lazy river, and a 30,000-square-foot outdoor wave pool named Big Water Bay.
The park will also include lockers rooms, private party rooms and an arcade, a kids’ play area with a 6-inch pool and tip buckets, private cabanas, concessions and a cocktail bar and restaurant named Smugglers Café.
Around 300 seasonal workers, including 100 lifeguards, will be hired to work at the water park. Currently, the amusement park employs approximately 375 part-time positions and OWA Corporate Division employs 75 full-time positions
Behind the stage are will be a 48-foot screen that can be used to broadcast movies, simulcasts and football games in high definition or for live performances.
OWA also announced it has partnered with Kidcam Camps to bring summer day camps for children 5-13 to Downtown OWA this summer. Campers will have access to daily activities and programs through Kidcam’s curriculum of science, technology, engineering and mathematics. Kids will also enjoy sports, arts and swimming. Camps are scheduled on weekdays from May 31-Aug. 5 from 9 a.m.-3 p.m.
Stephanie Bryan, tribal chair & CEO of the Poarch Creek Indians, said the new water park will be a slice of tropical paradise and a win-win for the Tribe and the City of Foley.
“What better place to go in the summer and winter?” she said.
Originally opened as The Park at OWA in 2017, the resort is transforming its 14-acre amusement park, featuring 23 rides and attractions, as well as a the new water park expansion into a tropical paradise named Tropic Falls.
Being inspired with OWA’s meaning of big water, which is derived from the Muscogee Creek language, the entire amusement park will now be filled with tropical touches allowing guests to feel like they have stepped into an island paradise.
This will include a complete makeover of the front gate and an expansion of tropical theming throughout. Guests can still enjoy the amusement park on weekends during the winter season, even while construction is taking place at the entrance.
“We are incredibly proud of OWA, the direction its moving and the economic impact it continues to have on not only the local community but state as well,’’ said “We are so excited to share that upon completion, Tropic Falls will be the only indoor water park in the United States with a retractable wall and retractable roof, allowing for the ultimate experience in Coastal Alabama climate control,” said Kristin Hellmich, the Director of Marketing and Public Relations for OWA Parks & Resort.
Tropic Falls will introduce a toucan as its first mascot. People can vote on their favorite names for this tropical friend or suggest one themselves through a survey link on OWA Parks & Resort Facebook page.
The projected opening date for the water park is May 2022.
OWA is owned and operated by the Poarch Band of Creek Indians. OWA’s name is derived from a Creek word for “big water,” and the tropical theme of the 520-acre property was inspired by the Gulf of Mexico. Just outside the ticketed areas is Downtown OWA, a pedestrian-only streetscape was inspired by Southern small towns with numerous options for dining, shopping, and entertainment.
Future planned phases at OWA include a luxury RV Resort with 150+ sites set to open this fall.