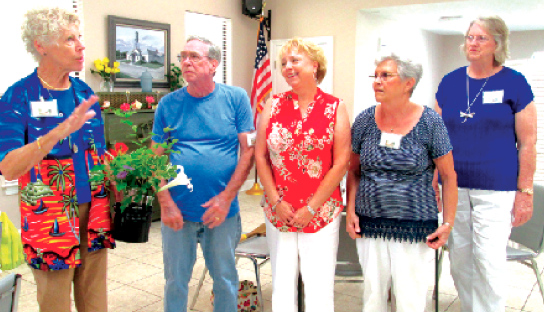 By Mary Ann Lindsay
The Robertsdale Garden Club formed in the early 1930s after vocational-agriculture teacher Harry Starnes designed a landscaping plan for shrubs and plants at the Robertsdale schools. At the same time, he assisted in the layout and planting of the yard of Grady P. and Bertie Gilbert, whose new home had just been completed at the north edge of Robertsdale.
With new homes being built throughout the town, Starnes’ design ideas caught the interest and imagination of many of Robertsdale’s women. This was the beginning of the Robertsdale Garden Club.
After 89 years, once again the Robertsdale Garden Club is headed by a gentleman: President Ken Ramey.
Other officers installed at the May 14 meeting were: First Vice President, Mary Frances Boykin; Second Vice President, Jimmie Lou Ramey; Secretary Treasurer, Hilda O’Clair; and Corresponding Secretary, Ramona Wagner. The club is on hiatus until its first meeting for the new year in September. Pictured: Katie Warren, Ken Ramey, Mary Frances Boykin, Jimmie Lou Ramey.