Home / CV / AL. Park Rangers on duty in times of calm and peril

AL. Park Rangers on duty in times of calm and peril 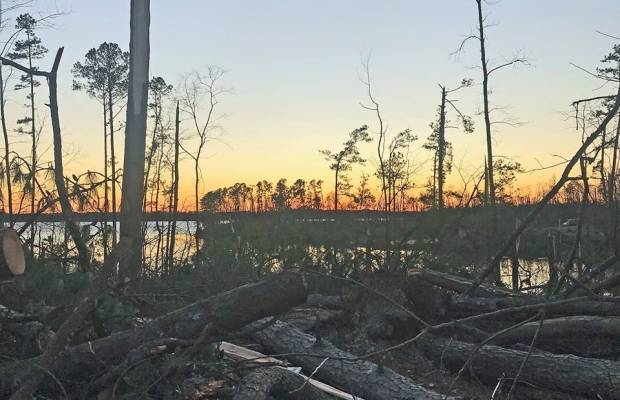 By David Rainer
Al Dept. of Conservation and Natural Resources

And as diligent as always, our park rangers are on duty to deal with any situation that might arise with everything from a welcoming wave and helpful hand to rescuing park visitors in peril.

That peril was particularly apparent last December when a line of storms started moving through north Alabama.

Joe Wheeler State Park Ranger Ryan Robertson was on patrol on December 16, 2019, while Ranger David Barr had the day off, or so he thought.

“That afternoon, we had some pretty volatile weather,” Barr said. “Ryan was running duty, and I stopped him at the boat ramp and told him I would be home if it got bad.”

It got bad at the 2,550-acre park on the Tennessee River near Rogersville. When a tornado warning was issued a little after 5 p.m., Barr donned his uniform and headed into the park to help Robertson warn the patrons and park volunteers of the impending storm.

Fortunately, with the Christmas season in full swing, the park was not full of campers or visitors.

“Ryan already had people evacuated from the campground,” Barr said. “We only had seven campers and four of those were volunteers. If we have a lot of people, we put some in the bathhouses and some at the campground store. Ryan took some of them to the lodge. He stayed with them.

“I was at the campground store with two ladies and two kids and a Pyrenees dog. I usually get out and ramble during something like this, but something told me not to do that. I stayed at the store. My son was with me, and he was watching the storm on the weather radar.”

Barr’s son told him the storm was about to hit, and Barr sent the visitors into one bathroom while he and his son got in the other.

The power went out, and a few minutes later it became apparent that they were in the tornado’s path.

“The store has metal doors on each side,” Barr said. “Those doors started flapping. I didn’t stick my head out to see, but it sounded like those doors were opening all the way and closing. The wind was howling and whistling. That lasted for three or four minutes and then it was quiet.”

While all campers, volunteers and park personnel escaped injury during the storm, the campground did not fare as well.

“When I was sure it had blown over, I thought we had escaped the worst of it until I went outside and got in my truck,” Barr said. When the lights came on, I could see big pine trees down. I tried to go up the hill to my house, but the road was blocked by trees.”

Barr walked the rest of the way to his house, which was unscathed, although numerous trees were down in the yard. Back in the campground, Barr discovered that the A section did not have much damage.

“But the B section was total destruction,” he said. “The bathhouse was destroyed. The meeting pavilion was caved in by trees falling on it.”

By that time, Barr was joined by Robertson and Park District Supervisor Chad Davis as well as part-time employee Morris Barnes, who has since become a full-time ranger at Monte Sano State Park.

Barnes hopped onto a backhoe and all hands started clearing downed trees out of the roadways until they realized live power lines were down in the park and decided to wait until daylight to resume their work.

The next morning, Barr discovered he had a view of the Tennessee River that he never expected or wanted.

“I’ve been a ranger and campground supervisor here for over 30 years,” he said. “This is my home. To see my life’s work blown away was devastating.

“We got strike teams in from other parks, cut our way through the different sections to assess the damage. I can’t really describe it. A section survived. Three-quarters of B section was gone. C section was completely wiped out.”

Barr, who was recently promoted to assistant superintendent at Wheeler, said out of 116 camping sites only 60 remained usable. Two bathhouses were destroyed. One large pavilion and two smaller pavilions were destroyed. Beautiful, tall pine trees were strewn throughout the campground.

“From my house, you can see forever,” he said. “You can see the river from my backyard, which you used to could never see. I can see all the way across the river. I miss the trees.”

Barr is just thankful that the pre-Christmas period is a slow time at Wheeler.

“I know of one camper who left early because of the weather,” he said. “I’m glad he did because that site he was staying at was completely leveled. If there had been many people in the campground, there would have been multiple fatalities.”

Barnes, who lives only 2½ miles from Wheeler, not only had heavy equipment experience, he also served with the Rogersville Police Department at that time.

Barnes ended up in an even more harrowing situation a few days after helping with the aftermath of the tornado.

Heavy downpours had caused creeks in north Alabama to swell rapidly. Barnes, who is trained in swift-water and high-angle rescue, had finished his shift with the Rogersville PD at 5 p.m. when a call came in about a car swept into a creek. That incident resulted in a fatality.

Then a second call came in about another car in the same creek not far away from the first incident.

“That girl’s mother went looking for her and drove off in the same creek, not knowing she was there,” Barnes said. “The first car was completely submerged. The second one, the front was stuck in the ground and the rear end was hung in a tree. The woman had managed to crawl out through the back glass.”

After being unable to rescue the woman, area enforcement officers called for the swift-water rescue team of which Barnes was a member.

Barnes got the Florence Fire Department to aid in the rescue with a rubber boat and a heavy fire truck that could be used as an anchor point in the swift water.

Barnes and another first responder got into the rubber boat and it was slowly released into the creek by rope.

“Once we got the boat over to the car, I knew her,” Barnes said of the trapped woman. “Everybody told me she was going to fight me, but when we made eye contact, I called her out by name. She called out my name, and then I told what I wanted her to do and not fight me. I got over close enough to put a life jacket on her and latched onto her. I didn’t try to drag her into the boat, but we dragged her to the opposite bank and released her to those personnel.”

Unfortunately, Barnes discovered the daughter’s car about 40 yards down the creek completely submerged with no hope of rescue.

After the incident, the Rogersville City Council and Mayor presented Barnes with a life-saving award that he was hesitant to accept.

“I’m not a hero,” Barnes said. “I had a job to do. To me, the hero was the woman. She hung in there for almost three hours until we could get to her.”

Barnes said it was a perfect example for the mantra of “Turn around, don’t drown.”

“It rained so hard and fast that the county didn’t have enough time to get up the barricades,” he said. “Lauderdale County is 71 miles wide. It just happened so fast.”

Sometimes, the problems park rangers encounter are not weather related.

For example, Lake Lurleen State Park Ranger Mark Caton, who has been a first responder in one capacity or another for more than 20 years, was checking people coming into the park when one vehicle left the road and went through the grass.

“We deal with all kinds of people,” Caton said. “It’s like having a concert in your jurisdiction every day.”

The driver of the errant vehicle exited and then jumped into the lake.

“Obviously, that’s not normal behavior,” Caton said. “He yelled, ‘Don’t try to get me out.’ But I grabbed my rescue boat and headed out. I didn’t get too close and tried to get him to talking. Usually, if you can get people talking, the less they think about what they want to do.”

Caton found out the swimmer had been in and out of psychiatric care and had been self-medicating instead of taking his prescription medicines. Caton also found out he and his girlfriend had had a fight and she kicked him out.

“He felt like he didn’t have anywhere else to go and was just going to swim until he got tired and drowned,” Caton said. “I tried to build a rapport with him and tell him that drowning was not the way to go. Finally, he was getting thirsty and tired. I tossed him a cushion float and he took it. That was the first step to get him back to the side of the lake. Then I told him we had some Gatorade on the other side of the lake.

“Believe it or not, the Gatorade worked. For somebody who wasn’t thinking clearly, he zoned in on Gatorade. He was close to drowning a couple of times. He swam back in and got his Gatorade, like we promised, and then we got him to a hospital.”
Pictured: The view of the Tennessee River from the Wheeler State Park campground was forever altered after last December’s tornado.