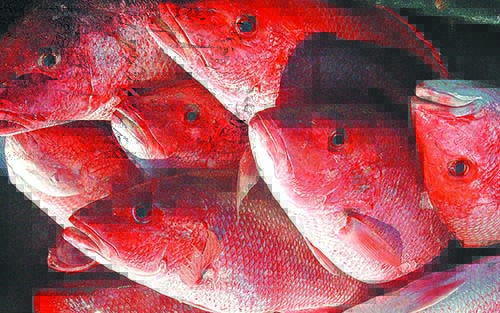 Alabama’s Red Snapper season opens May 27
By David Rainer
Al Dept. of Con. and Nat.Resources
The Alabama Department of Conservation and Natural Resources’ (ADCNR) Marine Resources Division (MRD) announces that Alabama state waters and federal waters will open to private and state-licensed charter vessel anglers for red snapper harvest on Friday, May 27. The season will consist of four-day weekends, Friday through Monday, beginning Friday, May 27, and continue until the private angler quota is projected to be met.
The season dates listed above only apply to anglers fishing from shore, private recreational vessels and state-licensed Alabama commercial party boats that do not hold federal for-hire fishing permits. (See sidebar.)
Alabama will continue to use Snapper Check to monitor shore, private vessel and state charter angler landings during the season and will provide weekly updates at outdooralabama.com.
Weekends open to red snapper harvest are defined as 12:01 a.m. Friday through 11:59 p.m. Monday. The daily bag limit will be two red snapper per person, per day with a minimum size limit of 16 inches total length.
Anglers 16 years of age and older must have an Alabama saltwater fishing license (resident or non-resident, annual or trip), and any Alabama resident 65 or older or a lifetime saltwater license holder must have a current saltwater angler registration. The saltwater angler registration and Alabama Gulf Reef Fish Endorsementis free and available at outdooralabama.com. Anglers under 16 are not required to be licensed, or possess an endorsement, but their catch must be included in a landing report.
The exact Alabama private angler quota for 2022 has not yet been provided by the NOAA Fisheries. MRD will announce a season closure date when the 2022 quota is anticipated to be met.
The Snapper Check program estimated Alabama’s private recreational anglers landed 939,143 pounds during the 2021 red snapper season, which was below the 1.12-million-pound quota. Since 2018, annual Snapper Check estimates have been very close to or just above the annual quota, which has ranged from 986,000 to 1.12 million pounds. Several people who spoke during the Gulf Council’s public testimony period said they were concerned that snapper were harder to catch this year than in recent years and were concerned that catches were leading to local depletion.
“Some people are worried about red snapper and use the term of ‘localized depletion,’” said Kevin Anson, the Alabama Dept. of Natural Resources Marine Resources epresentative on the Gulf Council. “Our contention is we’ve been penalized in the assessment, and we were never harvesting at the level we could. That’s why we ended up with such big fish and so many fish that it was easy for folks to catch a limit.
“When people are talking about the fish that are missing, they’re talking about the fish that are closest to shore. A large proportion of private recreational anglers do not travel too far from shore, and charter boat owners have been selling two or three trips a day during most of their season for several years. You can’t get out very far on four- or six-hour trips. Within the first few weeks of the season, most nearshore places, those within 20 miles from shore, get picked over and have smaller fish. That’s just how it is, but a large portion of the fish off Alabama are beyond that distance.”
As a reminder, anglers landing red snapper in Alabama with private boats are required by law to complete one landing report per vessel trip of their harvested red snapper through Snapper Check before the fish are removed from the boat or the boat with the fish is removed from the water. Reporting of greater amberjack and gray triggerfish also is mandatory. Also, all recreational anglers and charter vessels, state and federally permitted, in possession of Gulf reef fish are required to have an Alabama Gulf Reef Fish Endorsement.
The best and easiest way to comply with the reporting requirement is through the Snapper Check feature found on the Outdoor AL app. The app is available from Apple and Android stores. Reports can also be submitted online at outdooralabama.com. Paper reports and drop boxes are no longer available.
Also, the DESCEND Act goes into effect this year. The act requires all vessels that are fishing for reef fish in federal waters to have a venting tool or descending tool on board and ready to use when fishing. The venting tool is used to release gases from the fish’s swim bladder to allow it to return to the reef naturally. The descending device is used by attaching the fish to the device and lowering the fish and device into the water to a certain depth before releasing it. The goal of the Act is to reduce the effects of barotrauma to the fish, which will the increase the survival rate of discarded fish and improve the sustainability of the resource.