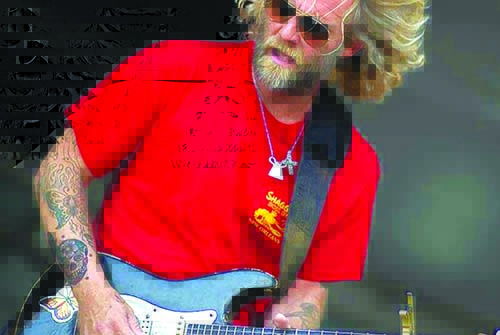 Anders Osborne on Oct. 29 closes out Fairhope’s Live at 5 concerts

Anders Osborne with Flow Tribe opening on Oct. 29 is the final show of this season’s Live at Five Series at the Halstead Amphitheater (450 Fairhope Ave.) on the campus of Coastal Alabama Community College in Fairhope. The cover charge varies by show. And as the title states, concerts start at 5 p.m., with the main act scheduled at 6:30 p.m. Tickets are available at eventbrite.com.There is at least one food truck at every show and attendees are welcome to bring coolers and picnic food to the family-friendly event. Well-behaved dogs are also welcome. There is no seating provided. So bring blankets and/or chairs.
Pictured: A powerful live performer, Anders Osborne has toured virtually non-stop, either with his own band, as a solo artist, or as a guest with his countless musical admirers, including Toots and The Maytals, Stanton Moore, Derek Trucks, Warren Haynes, Keb Mo, The Grateful Dead’s Phil Lesh, Jackie Greene and Karl Denson’s Tiny Universe. He’s produced and played on critically acclaimed albums by Tab Benoit, Johnny Sansone and Mike Zito. Since his recording debut in 1989, Osborne has written virtually all of his own material and contributed memorable songs to a wide variety of artists. Two tunes co-written by Osborne appear on Keb Mo’s Grammy-winning 1999 release Slow Down. Country superstar Tim McGraw scored a #1 hit with his Watch The Wind Blow By. Osborne’s compositions have been covered by artists as diverse as Brad Paisley, Sam Bush, Trombone Shorty and Aaron Neville.