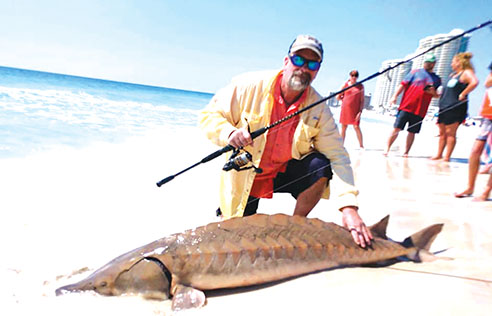 Angler lands rare sturgeon while surf fishing in Orange BeachBy David Thornton
One of the intriguing aspects of fishing is the angler never knows for certain will bite their hook. That point was explicitly made by David A. Rose (of Grawn, Michigan) around 11 a.m. on Saturday, March 6 while surf fishing in the Gulf just south of his rental condo in Orange Beach.
Mr. Rose had spent much of the past week fishing those waters and managed to catch several of the ‘usual suspect’ species anglers tend to find in the chilly waters this time of year. Whiting (Gulf kingfish) being the most common, plus croakers, stingray, a 5 lb. gafftopsail catfish, a pufferfish and a crab. But no one had any idea what took his fresh dead shrimp bait for most of the ensuing 40 minute tussle. Many bets were it was a shark, but onlookers were puzzled because there was no dorsal fin visible. Only when the Gulf sturgeon over 6 feet long slid onto the sand did everyone realize what an astounding catch David Rose had made.
Sturgeon were much more common in the region during precolonial times, but over fishing and habitat loss has decimated their numbers since then. They are now listed as “threatened” and have been federally protected since 1991. Mr. Rose wasted little time in getting this prehistoric beast back into the Gulf where it safely swam away. But he got some pictures and memories of his catch of a lifetime!
A rare catch it was indeed! Especially on a hook baited with just fresh dead shrimp. The rod was a 9 foot Penn, and the reel was a Penn Battle II 5000 with 20-pound-test- Silver Thread monofilament main line, and a 40-pound Berkley Big Game monofilament shock leader above a “Dusty’s Pompano Rig” tied with 20-pound monofilament. That rig features multi colored floats next to #6 Mustad circle hooks. A great testimony to Dusty’s rig tying and David Rose’s angling skills to land a fish weighing at least six times the rating of his line.
Gulf sturgeon (Acipenser oxyrinchus desotoi) dates back in the fossil record, unchanged since the time of the dinosaurs. They get to be rather large (up to 14 feet), so this was likely a young adult fish. Their internal skeleton is made of cartilage, much like a shark. However, much of their head and outer body is covered with bony plates, almost armor-like. Despite their bulk, they are noted for occasionally jumping out of the water. And boaters have been injured by that. But they are otherwise harmless.