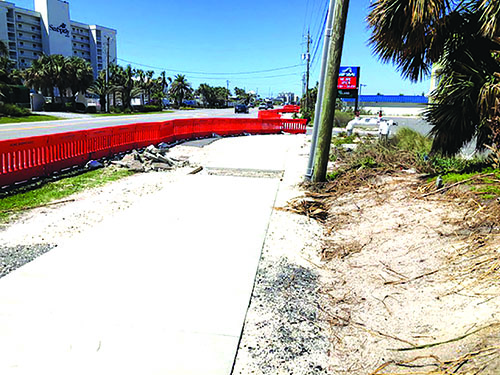 Another public input workshop for Johnson Beach intersection April 29
By Fran Thompson
Perdido Key residents made it clear that they wanted a roundabout at the intersection that links Perdido Key Dr. to Johnson Beach/Gulf Islands National Seashore during a public input meeting on the topic held in June of 2020. Those attending substantially favored the option over doing nothing at all or installing a stoplight.
But Escambia County will accept additional public input on the intersection’s future during a second public workshop for the Perdido Key Drive at Johnson Beach Road Intersection Project on Thursday, April 29 from 5:30-7 p.m. at the Perdido Key Community Center/Fire Station. The meeting will serve as the last opportunity to express public input before design is finalized, according to a press release. It will include opportunities for attendees to view project boards in open house style and submit public comments.
The roundabout option will incorporate safety protocols for those crossing the road from the Perdido Key Multi-Use Path along Perdido Key Drive to Johnson Beach Rd.
The roundabout was the most expensive of the three options, but would do the most to reduce the severity of traffic accidents, according to County officials.
In a Perdido Key Association (PKA) sponsored property owner survey from 2020, about half of the respondents were in favor of a roundabout at that intersection, with the other half split between a traffic signal and the do nothing options.
“From that meeting and presumably other studies, the County has moved forward to plan a roundabout. I am not aware of the options remaining to consider, but they may deal with things like how a crosswalk and linkage to the Perdido Key Multi-Use Path will be accomplished and perhaps how approach zones with speed limits, lane markings, etc., will be designed,’’ said PKA president Charles Krupnick.
A recording of the workshop will be made available for viewing on YouTube, along with an online comment form the following day. For more info, call 850-595-1647 or email cmr@myescambia.com.
The Perdido Key Multi-Use Path project will extend approximately 6.2 miles from the Alabama-Florida state line eastward through Perdido Key State Park to River Road. Construction of the eight foot wide paved path has begun at the west end of Perdido Key State Park and moving toward the Alabama state line.
Pictured: The Perdido Key Multi-Use Path is now under construction.