Artworks adds Tony Krysinsky to its roster of artists 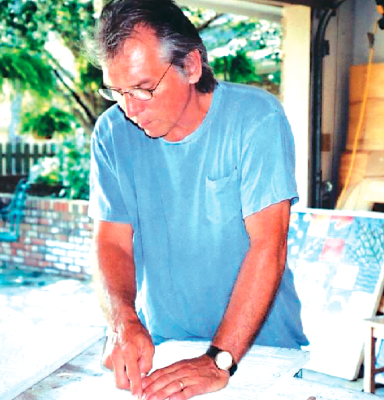 By Fran Thompson
Artworks Art Gallery on Perdido Key has added work from Tony Krysinsky to its walls and, as a bonus, will welcome the award winning Innerarity Point artist to its stage during the gallery’s July 6 twelfth anniversary party from 2-8 p.m. at Villagio Center (13700 Perdido Key Dr.).
“In the past we’ve gone up the East Coast in the summer, but we decided to stay home this summer and see what is going on locally,’’ Krysinsky said. “I was with Talis many years ago and I have known her forever. So, it was a natural thing. We are just dabbling in local stuff. So, we’ll see what happens.’’
Krysinsky has also placed his paintings in Prosperous Pelican in Orange Beach, but he has primarily made his living working around 18 festivals per year with his son Kyle, wife Jean and Kyle’s dog Mira at by his side.
“Staying at home has also given me the time to work on new things, commissions and a little bit of everything else,’’ he added. “It has also given me a chance to do more music.’’
Krysinsky, a natural born soul & blues singer, also plays guitar and harmonica. He led one of Pensacola’s best ever bands, the Persuaders, during the 1980’s.
“I’m looking forward to the party on July 6,’’ Krysinsky said. “Talis has been at it a long time. I see this more as a celebration of her. It’s hard to stay in business in Perdido Key in any business that doesn’t sell alcohol.’’
Originally from Long Island, Tony began drawing and painting as a child and never stopped. A surfer, he moved to Pensacola after earning a masters in art from Tulane in New Orleans. The Crescent City and his love of R&B music continue to influence his visual art.
Tony’s work is a combination of engraved imagery and transparent layers of acrylic glazes on tempered hardboard panels. He uses a router to engrave the linear design elements into the panel and then brushes on layers of glazes for the colors.The result is a colorful and textural surface of carved and painted images that are reminiscent of a wood or linoleum block.
“Having lived in Florida for most of my adult life, the images around me, both real and imaginary, have intertwined to help me create a style that conveys a contemporary coastal feel that is both sophisticated and fun,’’ he said.
Talis Jayme, with the help of Brucie Glassell, opened Artworks Studio and Gallery as an impromptu artist’ co-op.
It has since grown into a significant source for local artwork including, paintings, jewelry, pottery and glasswork. Artworks hosts numberous functions, including songwriters’ nights and book signings.
Artworks is a drop site for unopened non-perishable food for 325 Zero Hungry year