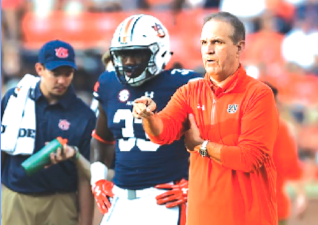 The Baldwin County Auburn Club Scholarship Banquet will be held at the Event Center at the Wharf in Orange Beach on Tuesday, April 30. It is the mission of the Baldwin County Auburn Club to foster the Auburn Spirit. We feel that the best way to do this is by helping our local students achieve their dream obtaining an Auburn education. The Club gives a full scholarship to a top student in Baldwin County and seven one thousand dollar scholarships to one student from each Baldwin County high school.
A silent auction will be held in conjunction with the banquet. All proceeds will go to the scholarship fund. This event is our largest fundraiser for these scholarships. This year’s guest speaker is Coach Kevin Steele (pictured) and Aubie will also appear.
Coach Steele is the defensive coordinator at Auburn and was defensive coordinator at LSU. Previously, he was the defensive coordinator at Clemson University from 2009 until early 2012. From 1999 to 2002, Steele served as the head football coach at Baylor University. Coach Steele’s expansive knowledge of defense includes over 30 years of coaching experience at major college football programs and the NFL. An elite recruiter, Steele helped Florida State bring in several top classes in the mid 2000s under Bobby Bowden and recently led Clemson to its first ACC Championship since 1981 as the Tigers’ defensive coordinator.
The BCAC will also collect gift cards which will be sent to the Lee County Sheriff’s office which will distribute them to victims of the recent tornado in the Lee County area. Gift cards can be from Walmart, Lowe’s, Home Depot, VISA or MasterCard.
The Scholarship banquet will be catered by Street’s Seafood Restaurant. Tickets are available for purchase by sending a check made out to Baldwin County Auburn Club c/o Diane Sellers, 8597 Pine Run, Daphne, Al. 36527 or you may purchase online at auboom19.eventbrite.com. Fees will apply. You can pick up your tickets at the Will Call table on the night of the event. Ticket prices are adults $35, children $15 (children under 4 are free), family table of eight $280, and corporate table of eight $400. The doors at the Event Center will open at 5:30 pm with dinner being served at 6:00 pm. Info: 251-623-2350. War Eagle!