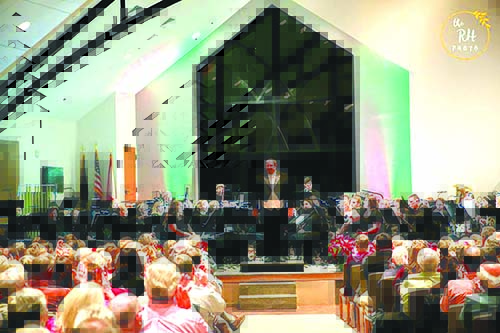 The Baldwin Pops Band will present “Baldwin Pops Winter Concert” at the Orange Beach Event Center at 7 PM Tuesday, February 27. This free concert concludes the 20th Anniversary of the Baldwin Pops Band. This concert is sponsored by the City of Orange Beach. Contact baldwinpops.com, search Facebook for Baldwin Pops Band, or call 251-987-5757 for more info. The Baldwin Pops Band performed its first concert 20 years ago this week. Two of the original conductors from 1998 will conduct pieces on this concert. Conductor Emeritus Joe Riemer, who continues to play in the band, will conduct Esprit de Corps by Robert Jager. Steve Sims, retired band director from Fairhope and McGill-Toolen high schools, will conduct aJohn Philip Sousa march, Whos Who in Navy Blue.
The band’s new conductor for 2017/2018, Dr. Jason Rinehart, who is Associate Director of Bands at the University of South Alabama, will conduct a challenging program including Commando March by Samuel Barber, The Promise of Living by Aaron Copland, Finale to Symphony No. 5 by Dmitri Shostakovich, and The Witch and the Saint by Steven Reineke. Cathy Brumback, vocalist, will be featured on As Time Goes By by Herman Hupfeld.