Battle of Mobile Bay anniversary event May 19-20 at Ft. Gaines 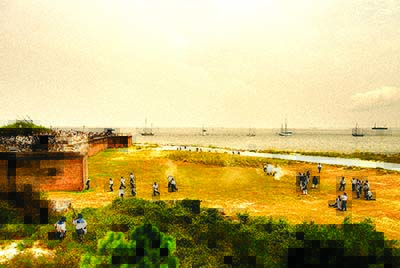 Battle of Mobile Bay anniversary event May 19-20 at Ft. Gaines

Fort Gaines on Dauphin Isle will commemorate the 154th anniversary of the Battle of Mobile Bay on May 19-20 with its Thunder on the Bay event. Sponsored by the 6th Alabama Cavalry and the Alabama Division of Reenactors, the event will include a 2 p.m. naval battle and 3:30 p.m. surrender ceremony on Saturday. A 1 p.m. siege of Fort Gaines is scheduled on Sunday. There will be a blacksmith working in the forts original blacksmith shop, and music on both days and music beginning at 9 a.m. on both days.
The event will highlight the Fort’s integral role in the Battle of Mobile Bay. The weekend will also showcase a naval battle where federals and confederates exchange artillery fire when re-enactors depict the siege on Fort Gaines by the Union as they steam into Mobile Bay. For more information, call 251-861-6992 or visit DauphinIsland.org. Admission to the fort is $8 for adults and $4 for children 5-12.
The well-preserved ramparts of Fort Gaines have guarded the entrance to Mobile Bay for more than 150 years. Today, the fascinating historic site is open daily for tours, school groups and sightseers. Its prime location on the eastern tip of Dauphin Island commands panoramic views of the bay and the Gulf of Mexico and offers a chance to experience living history first hand.