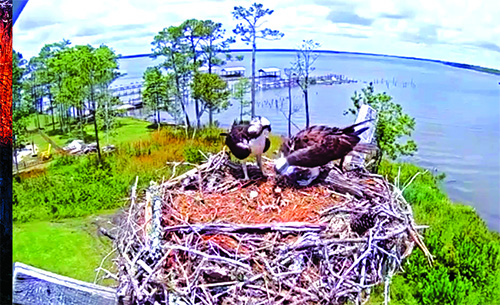 Bert and Jo have not been seen on cam passing out cigars to pelicans and herons, but there is celebration at the Wolf Bay osprey nest behind the Orange Beach Library this week. Josephine (who goes by Jo) and Elbert’s (Bert) two chicks have hatched and they’re hungry.
Only the female incubates the eggs, and the male’s job is to bring food for the mother until the chicks are hatched and old enough that she can also hunt. The webcam on the nesting platform is sponsored by the City of Orange Beach, the National Fish and Wildlife Foundation, the Alabama Coastal Foundation, the Backcountry Trail Foundation, and The Nature Conservancy. See it live through links on youtube or visit orangebeachal.gov.
The first osprey nest webcam was launched in the spring of 2014 at the Orange Beach Recreation Center and it was an immediate hit with virtual visitors from 112 countries watching Allie and Bama raise two babies, Ossie and Aubrie, until they were able to fly off. Great horned owls grew fond of the nest and have also used the osprey nests to the delight of internet followers. This is not uncommon. The view from the Wolf Bay nest provides a wide shot of the Wolf Bay, sunsets and the stunning natural scenery. Ospreys also build nests at the tops of trees, telephone poles, service towers, or nest platforms made specifically for that purpose like the nest at the Orange Beach Library. Established osprey pairs often return to previous nest sites. Ospreys are monogamous and generally mate for life. However if one of the pair