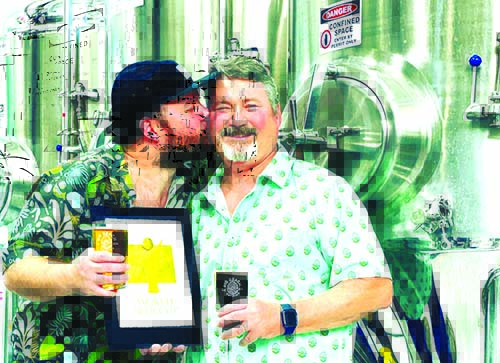 Brewers Rod Murray and Ryan Bingham (pictured), along with Big Beach Brewing staff offically put themselves on the craft beer map at the recent World Beer Cup in Minneapolis, taking home their first ever Gold Award in the German-Style Schwarzbier category.
The competition included 11,000 beer entries, 2,600 breweries from 60 countries, and 236 judges from 30 countries
The Surrender Cobra German-Style Schwarzbier is typically a seasonal offering, but now that it will be highly-respected along with other Gold Medal award-winning beers, Big Beach hopes to keep the dark lager available as often as possible.
“We have always known our brewers make great beer, and that it was just a matter of time before we medaled nationally, let alone globally. We as a staff are feeling extra proud given the fact that this category was up against German breweries and included Germans on the judge panel,” said Millie Shamburger, company co-founder.
A family operation, Big Beach Brewing has been open in the Waterway District in Gulf Shores (300 E. 24th Ave.) for six years. Owned by the Shamburger family, the brewery has also earned medals in regional competitions like the Alabama Craft Beer Championship and the National Honey Board.
The local brewery doesn’t package beers in cans for distribution, there are plenty of pints to be had behind the bar or to-go beers available in the taproom.
“I have strived my entire brewing career to make the best beer I could. Every batch, every day, year after year for decades. I knew Big Beach Brewing makes Championship-worthy beer, we just had to be able to prove it. World Beer Cup Gold Medalist is definitely proof of our efforts,” said Murray, the head brewer and now world champion.