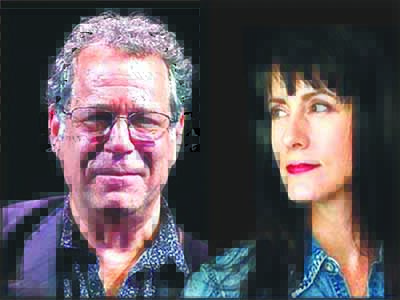 The Big Lagoon State Park Fall Concert Series will kick off with a performance from Cliff Eberhardt and Louise Mosrie on September 7 at 6 p.m. at the park amphitheater. The series is being held in conjunction with Sunshine State Concessions on the First Friday of September, October and November. Tickets may be purchased online at squareup. com or at the event. Tickets are $18 for one person, and $30 per couple, plus park entry fees.
On Octber 5, Hiroya Tsukamoto, a highly touted singer and guitarist from Japan, will perform. The Nov. 2 line-up will feature Patchouli & Terra Guitarra. Pictured: Cliff Eberhardt has recorded nine albums and has produced and arranged seven more for a wide range of artists. He was a staff songwriter for Cherry Lane music and has a song book published by Hal Leonard. After winning top awards at the Kerrville Folk Festival and Telluride Bluegrass Festival, Louise Mosrie’s album “Home” debuted at #1 on the Folk DJ charts in January 2010 and went on to be one of the most played albums that year for that chart. Since then she has been touring all over the Eastern seaboard, the South and Texas. She’s played at The Bluebird Café in Nashville, Club Passim in Boston, Caffé Lena in NY and was just recently invited to play at The Birchmere in Washington DC. Her newest project, “Lay It Down”, a collectio