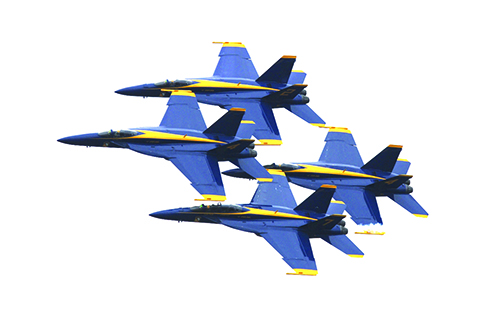 The Pensacola Naval Air Station based Blue Angels flight demonstration team has announced practices for April 6, 7, 13, 14, 20, 21, 27, 28 and May 4, 5, 11, 12, 18, 19 over the Naval Air Museum at NAS Pensacola. Access to the flight line opens at 9 a.m. and the Blues fly at 10 a.m. The one hour practices are open to the public at no charge.
“I think because of DoD card holder restrictions, the crowd was small like it used to be, with several hundred spectators,’’ said Innerarity Point resident Cathy Deal, who attended a late March practice and shared the pictures above. “So glad to see our Blues back home.’’
Practice flight access to the world famous U.S. Navy flight demonstration team is open only for those holding Dept. of Defense ID cards and their guests.
The pilots will be flying brand new F/A-18 E/F Super Hornets in anticipation of the first scheduled show, the April 17-18 Sun N’ Fun Aerospace Expo in Lakeland. After 34 years of dazzling fans nationwide, the team took their final flight in their Legacy Hornets last November, a ell publicized send-off that was viewed by thousands of fans from Navarre Beach to Fort Morgan. The new C-130J Super Hercules Fat Albert is also expected to perform for the first time in Lakeland.
The Blues are currently only promoting a one-day Pensacola Beach Air Show on July 10, in addition to their annual homecoming shows at NAS Pensacola November 5-6.