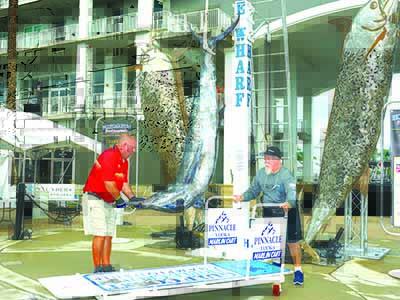 So, what makes the Blue Marlin Grand Championship of the Gulf such a special event? The over-the-top weigh-in experience appropriately billed as “the greatest show in sportfishing,’’ and the possibility of seeing a state record fish, as happened in 2013 when Chris Ferrara (with Capt. Mike Roberto) brought home a 845.8 blue marlin on The Reel Fire.
Recognized as one of the Top 20 events in the Southeast, the BMGC will be held July 11-14 at The Wharf and, due to unprecedented demand, will increase its fleet from 60 to 85 boats.
Blue Marlin Miler
Another new addition to the Blue Marlin Grand Championship,is The Blue Marlin Miler: 5K and One Mile Fun Run for St. Jude will be held on Saturday, July 14 on the grounds of the Wharf. Race day registration ($35) begins at 6:45 a.m, with the one miler starting at 7:30 a.m. and the 5K 15 minutes later. Race refreshments will be provided and registration includes event T-Shirt. Both runs will take place on The Wharf complex property and finish under the scales at show center. Packet pickup will be at Villaggio at the Wharf on Friday prior to the race from 2 – 7 p.m. Pre-registration ($30) is available at eventapps.stjude.org.
The Grand Championship has raised $107,000 and aims to raise even more for the kids of St. Jude. New to the event this year are a 5K Run and One Mile Fun Run. Thanks to your generosity, families never receive a bill from St. Jude for treatment, travel, housing or food — because all a family should worry about is helping their child live.
Part of Triple Crown
The local tourney is part of the Gulf Coast Triple Crown Championionship, created to recognize the top sportfishing team on the highly-competitive Gulf of Mexico blue marlin circuit. The original concept was the brainchild of Sonny Middleton of Middleton Marine, a long-time advocate of sport fishing and boating in the Gulf. Under the format points are accrued for first through third place finishes in the blue marlin divisions, catch-and-release divisions, as well as first-place finishes in the tuna, wahoo and dolphin categories.
In addition to the Blue Marlin Grand Championship, other participating events include the Mobile Big Game Fishing Club’s Memorial Day Tournament, the Cajun Canyons Billfish Classic, the Mississippi Gulf Coast Billfish Classic and the Emerald Coast Blue Marlin Classic.
July 12 Boat Parade On Intracoastal
The tourney’s participating boats leave the docks at The Wharf Marina at 11 a.m. on July 12 for the start of the tournament. The public is invited to witness the boats heading out to sea past Canal Road, a prime viewing point for the general public to see the boats parading in anticipation of the tourney’s total cash prize purse of $1 million plus.
The tourney weigh-in officially opens on Friday, July 13 at 5 p.m. so any marlin that were caught during the first day of fishing will come in Friday evening. The big show occurs on Saturday, as the fleet returns from fishing and to weigh their catches. Last year an estimated 15,000 spectators turned out to enjoy the spectacle and The Wharf’s many other amenities.
More info: bluemarlingrandchampionship.com
••••••••
Blue Marlin Grand Championship Schedule
Wednesday July 11:
6 pm: Sponsor Village Opens & Billfish Boat Show
7 pm: Wharf Street Party Concert w. Garrett Howell Band
9 pm: The One and Only – Miss Billfish Contest
Thursday July 12:
9-11 am: World Famous Dock Walk
11 am: Boat departure & Boat Parade
6 pm: Sponsor Village Opens, BillfishBoat Show & Circus on Main
Friday July 13:
5 pm: Sponsor Village Opens & Billfish Boat Show
5-8 pm: Tournament Weigh-In Spectacular
Saturday July 14:
7:30 am.: 5K and One Mile Fun Run for St. Jude
5-10 pm: Tournament Weigh-In Spectacular
7-9 pm: Live Tournament Television Broadcast on NBC-15-WPMI