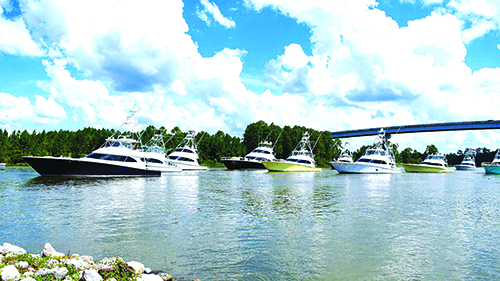 The “Greatest Show in Sportfishing,” the Blue Marlin Grand Championship, is scheduled for July 13-16 at The Wharf in Orange Beach. Regular weigh-ins, hosted by Jim Cox, are set for 5-8 p.m. Friday and 5-9 p.m. on Saturday or until the last eligible fish has been weighed.
Boats will depart The Wharf Marina at 10:01 on Thursday and proceed to Perdido Pass. For spectators who want to see the boats return to the weigh dock, all tournament boats must return to The Wharf for weigh-in through Sailboat Bay. Weigh-ins will be held under the marlin on Main St. at The Wharf.
For more info, visit gulfcoasttriplecrown.com or call Ashley at 850-252-2592.
The best big-game anglers in the nation will compete to catch the biggest Sailfish, Blue Marlin, Dolphin, Wahoo, Spearfish, Yellowfin Tuna and White Marlin. There is also an unidentified billfish category. Blue marlin must be 110-inch minimum size to be weighed. Weighed blue marlin will be awarded one point for each pound up to 499.9 pounds. Any blue marlin 500 pounds or larger will be awarded two points per pound. For example, a 700-pound blue marlin will be awarded 1,400 points.
In the catch-and-release category, each blue marlin gets 501 pounds, while white marlin and spearfish are awarded 250 points, and sailfish or unidentified billfish earn 200 points.