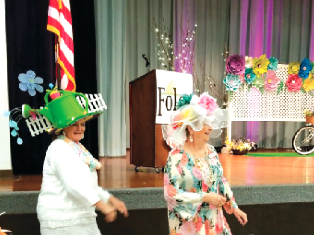 Bo Entertains Mad Hatters
People were dancing in the isles and singing along with Bo Grant at the Foley Woman’s Club’s annual Mad Hatters’ Event on March 14 at the Foley Civic Center. Bo was a former member of the The Platters and is quite an entertainer. The luncheon is the club’s annual fund-raising event and features a catered lunch, fashion show, raffles, silent auction, Pot of Gold and the famous hat contest and parade. The theme was “n the Garden and the hats and costumes worn by members and guests were “out of this world”.
Guests entered the room to a breath-taking view of colorful tables adorned with hats and flowers and decorated garden gloves filled with silverware at each chair. The stage was equally beautiful with colorful flowers. The famous Hat Parade showcased many unique creations – winner of the Best Theme was Debbie Johnson; Kayla Barrett won Wackiest hat and the Most Glamorous hat was won by Brenda Hollis. Fashions provided by The Beach House Boutique, Chico’s-Tanger Mall and Dillards-Eastern Shore delighted the audience as the models moved among the crowd. Hundreds of silent auction items challenged guests to bid and bid they did. Raffle tickets for unique raffle baskets were sold and many guests went away with a basket. A $500 Pot of Gold was won by Joan Davis. The seated luncheon served by Foley Woman’s Club members was catered by l.a.barbeque. All profits from the event go to women and children services in Baldwin County. The members of the Foley Woman’s Club thank all of the businesses and individuals who provided donations to help make this event a rousing success. (Submitted by Barbara McCamish).