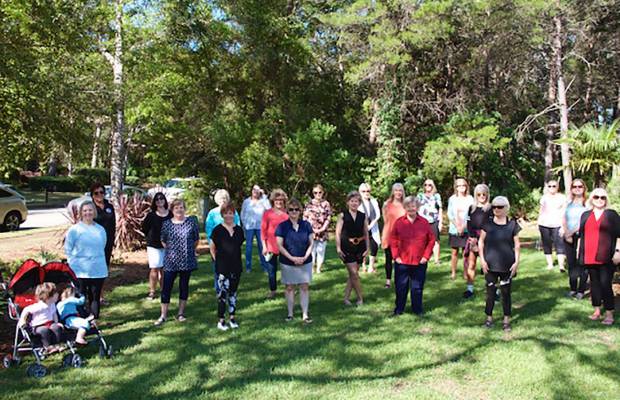 Boomer Brigade makes 700 masks for SBRMC
35 women from The Peninsula team up to help
By Fran Thompson
A group of women 35 strong, all residents of The Peninsula subdivision on Ft. Morgan Rd. in Gulf Shores, will have donated 700 hospital quality surgical masks to South Baldwin Regional Medical Center when they drop off their final batch on April 30.
It started as an idea, a meeting on a driveway with Cindy Grasso, Judy Sholtis, Beverly Allison and Brenda Ceruzzi. What followed was a phone call to an administrator at SBRMC who said they needed masks that would be acceptable for hospital use. A flyer was placed in The Peninsula owners website asking for ladies who would be interested in volunteering their time to make masks.
The Boomer Brigade was born!
The brainchild of Grasso, an Ohio native who has lived at The Peninsula with her husband for 20 years, the one month project included many women who had never met before.
“I was laying in bed trying to think what it is that I could do and I came up with this,’’ Grasso said. “A lot of us did not know each other before, but we came together as a team.’’
Grasso split the volunteers into eight teams, with each team member having a specific job. At the request of SBRMC, the women used fabric ties rather than elastic bands on the masks. “It was like an assembly line,’’ Grasso said. “When one lady got her job done, she would take it to the next lady (leaving it on her door) until the masks were finished and delivered each Friday by the people who were in charge of the final step of stuffing the masks with coffee filters.’’
Grasso said friendships have been formed during the project. Some volunteers recently met for the first time after dropping off bags by front doors and communicating via texts for four weeks.
“It was whole team effort,’’ Grasso said. “I’m very proud of what we were able to do. It is a wonderful group of women who just all decided we were going to so something and we worked beautifully together.’’
Sholtis, the project’s sewing coordinator, is a former teacher at Christ The King in Daphne who retired to The Peninsula with her husband five years ago. She is Grasso’s next door neighbor. “She called and said ‘Judy, we need to think about making masks or something,’ and I just happened to be downloading a mask pattern,’’ she said.
A sewer for more than 50 years, Sholtis put out a few sewing fires while helping the volunteers along. “I have gotten to know so many wonderful people in this neighborhood,’’ she said.
Grasso said it turned out to be a wonderful experience. “I think these women should be very proud of themselves,’’ she said.
Sholtis agreed. “I am overwhelmed and moved by all the women who came forward,’’ she said. “We formed new friendships. There was such a need at that point and it has just been wonderful to see people doing what they can. People here are willing to do anything to help.’’
In addition to Sholtis, Ceruzzi, Allison and Grasso, the Boomer Brigade included Sandy Barker, Debra Wyler, Toni Klutho, Mary Ann Pflueger, Sharon Merke, Anne Riggs, Rosalie Kuskey, Ginger Houston, Jan Dugan, Loren Garofalo, Tina Sybert, Kathy Morris, Cindy Sedge, Ellen Rogers, Rhonda Barber, Kathy Barber, Darlene Fuehring, Lauri Rogers, Linda Hill, Susan Andrews, Andrea Carstens, Joyce Wolf, Tracy Marmalejo, Sandy Schuchardt, Brenda Braswell, Linda Wood, Heidi Stanley, Laura Hagen, Joan Pursley, Eileen Leonard and Charlotte Stinson. Grasso also thanked Jan Ricks, the Brigade’s contact at SBRMC, and Fuehring for taking the team picture (below). “Not everyone could make picture day, but thank you to all these incredible ladies. It’s a testament to people working together for a common goal,’’ she said.