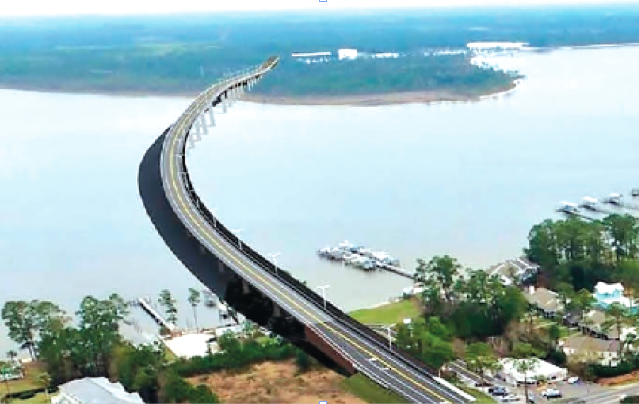 By John Mullen
State officials say about half of the work moving utilities to make way for a fifth lane on Canal Road is completed and they are hoping to let the project out for bidding soon.
“We’re plugging along with the utility relocation out there on Canal,” Assistant Southwest Region Engineer Brian Aaron said. “I’d say we’re roughly 50 percent complete on that so we’re going to continue to work through that over the next few months.”
Aaron said the Alabama Department of Transportation expects to have a bid letting on the widening project ready by June and looks to start construction as soon as the busy summer season subsides. He estimates it will take a year to complete the project.
“That’s kind of by design because we really didn’t want to hop out there in the busy summer season,” Aaron said. “What we anticipate is we would start construction basically right after summer.”
oAt first relocating power poles along the route was thought to be a big problem – and expense – but Aaron says the widening project will work around those.
“Most of the electricity is actually staying,” Aaron said. “There’s only a couple of large transmission poles that have to be moved out of the way. Each one of those poles are like $200,000 apiece to move. It was going to be $20 million to move all those poles. We actually went and got a design waiver so the poles are staying except for just a few of them.”
Most of the utility relocation that is occurring is gas or fiber. The relocation of sewer and waterlines will be part of the road construction project, Aaron said.
A major change in the plans was caused by the coming reality of a Wolf Bay Bridge which will connect on the north side of the Canal Road and Alabama 161 intersection. How that intersection will be designed and developed is a separate project from the simple adding of a fifth lane.
“There’s two projects down there and two phases and phase one is the actual five lane,” Aaron said. “Phase two is improvement to that intersection.”
“When we looked at that about three years ago Wolf Bay Bridge (rendering pictured) was on again, off again,” Aaron said. “We just had to kind of make a decision based on the fact that Wolf Bay wasn’t moving forward.”
Part of that design included doing away with the Tom Thumb and other stores in the corner strip mall. Two southbound, free-flowing turn lanes were going to take out the businesses. The inevitability of the new bridge’s impact on the intersection saved the stores there.
“Over the last month or month and a half, we’ve had discussions with the city,” Aaron said. “They are moving forward on Wolf Bay with permitting. They are committed to moving forward on that job.
“What it forced us to do was really step back and say once Wolf Bay connects about five years from now, what does that do to this intersection with what we’ve planned with the Tom Thumb? And it doesn’t work so we’ve stepped back and said we don’t need to buy this right of way and we need to stop this acquisition.”
State officials don’t have a plan yet for intersection but one option on the table is a southern bypass along a right of way from the front of Big Mike’s Steakhouse on Canal Road to south of McDonald’s on Alabama 161.
“We’re going to have to look at several alternatives,” Aaron said. “We’re basically going to have to start from scratch as regards to the NEPA process. We’re going to have to evaluate alternatives which could include that bypass to the south.
NEPA is the National Environmental Policy Act and there is some potential wetland encroachment along that bypass route that could slow up the project.
“There are so much wetlands it would delay us finishing by years,” Orange Beach Mayor Tony Kennon said in July. “It could be as much as seven years to get that done.”
Whatever the outcome, Aaron said, the intersection will be a big improvement over what’s in place now.
“I think it’s going to be better for traffic and to try and get rid of that nasty intersection that’s always a bottleneck or a problem,” Aaron said. “We’ll get two lanes free flowing south onto 161 down to the beach road and help facilitate that movement of traffic.”

Gulf Shores Bridge
Aaron says he believes the southern half of the project which includes the proposed Gulf Shores bridge over the Intracoastal Waterway (just west of The Wharf) will also go out for bid in June.
“We’re on target to let that one in June as well,” Aaron said. “The Corps permit as well as the Coast Guard permit, we’re just waiting on those permits. Hopefully those will get issued in that time frame.”
The second part of the project from the Foley Beach Express to Cotton Creek Drive is being held up by a redesign of the intersection of the express and the new road.
“It will be two lettings,” Aaron said. “The first project that will be letting in June will be from Cotton Creek Drive or County Road 4 south and that includes the bridge over the canal. The next project we’re probably looking at a September letting and it would be between the Beach Express and Cotton Creek Drive. We still have the latest change from the public meeting where we made the decision to go with the roundabout option. There were some additional right-of-way parcels we had to go acquire. We’re current