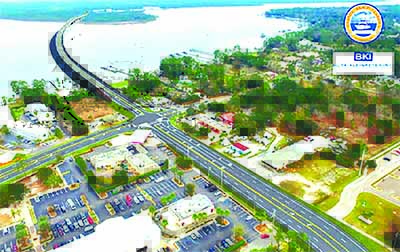 Funding in place, but agreements with landowners on the north side proved difficult
By John Mullen
Although the effort to build a Wolf Bay Bridge is stalled by a variety of factors, including the procurement of land on the north side of Wolf Bay, the Orange Beach City Council is considering spending a final $212,000 to finish the application for a permit for the project from the Army Corps of Engineers.
“That is the end of the spending to move forward with a possible permit,” Mayor Tony Kennon said.
Council held a joint regular session and work session on Nov. 2. The Wolf Bay study funding was on the work session agenda and will likely be voted on at the Nov. 17 joint meeting.
“It’s just more or less what’s required by the Corps to finalize the permitting process so that they can make a decision,” Kennon said. “There’s no building the bridge unless the Corps gives us a permit. There’s no going forward. This will define what our options are. If they deny it then there is no Wolf Bay Bridge until sometime in the future, they change their mind.”
But that’s just one obstacle of many out of the way on a path to a Wolf Bay Bridge not the least of which is ironing agreements with landowners on the north side of the bay. Those include George Barber, owner of Barber Marina and Barber Dairy, and David Lawrenz.
“If they give us the permit all that does is give us the option to build but we still have a lot of hurdles in front of us between how we finance it going forward, what do we do to finance it, dealing with the landowners on the other side and having them become a part of Orange Beach,” Kennon said.
In September of 2017 both Gulf Shores and Orange Beach voted to raise the lodging tax 2 percent and to use the money on road projects and the Leave Only Footprints beach initiative. That raised the rate to 13 percent overall with the state getting 4 percent, each city collects 7 percent, and 2 percent goes to the island Convention and Visitors Bureau to woo tourists to vacation in both cities and the Fort Morgan peninsula.
But Kennon said uncertain times caused by many factors in 2020 doesn’t make funding the bridge through the added taxes a done deal.
“Even with the permit in hand doesn’t mean the bridge is going to get built any time soon,” Kennon said. “For me I think it’s extremely important that we be very, very conservative with what we do dollar wise and what we commit to. With COVID and things changing I think you have to reevaluate everything now. At that point and time, we put (the lodging tax) in place we were in great shape, but I don’t think now you can take anything for granted going forward.”
The council will consider two resolutions on Nov. 17 authorizing contracts with Burk-Kleinpeter for project engineering services and for an environmental study and permitting of the Wolf Bay Bridge in an amount not to exceed $212,942.
During regular session, council:
• Passed a resolution rescinding the declaration of emergency for Hurricane Zeta.
• Passed a resolution designating depositories and authorized signatures on bank depositories.
• Authorized a contract with Thompson Consulting Services to provide additional debris monitoring, emergency management planning and disaster grant consulting services related to Hurricane Sally in an amount not to exceed $524,238.
• Postponed voting on a resolution authorizing the execution of a performance contract with the Alabama Gulf Coast Convention and Visitors Bureau for the purpose of hosting the SEC Soccer Championships at the Orange Beach Sportsplex.
• Passed a resolution authorizing a contract with Goodwyn, Mills & Cawood to perform design services for the Orange Beach Soccer Stadium in an amount not to exceed $169,250. The city is moving the SEC women’s championships to the smaller soccer stadium at the Sportsplex and will use the larger one for Orange Beach High School’s football team.
• Heard a request from developers of Bluffs of Orange Beach to allow for setbacks for seven of the 10 encroach two feet on the back setback for the decks and a setback variance for a pool as well. The council voted unanimously for the change with Councilman Jeff Silvers abstaining.
• Passed ordinances reappointing Renee Eberly as city clerk and to appoint Finance Director Ford Handley as city treasurer.
• Set a Nov. 17 public hearing date to appeal the conditions of approval set by Planning Commission for the site plan review for Gulf Coast Rental Auxiliary Parking.
In work session, council discussed:
• Approving resolution approving the Fiscal Year 2021 Budget for the City of Orange Beach.
• A resolution extending the entertainment district at The Wharf and San Roc Cay Marina/Perdido Resort.
• A resolution authorizing the purchase of a portable generator for the Utilities Department through Sourcewell in the amount of $79,864.
• A resolution authorizing the execution of a professional services agreement with Safe Span for post Hurricane Sally engineering and bridge inspection services.
• A resolution authorizing the execution of a professional services agreement with Sawgrass Consulting for civil engineering and land surveying services.
• A resolution awarding the bid for athletic uniforms.
• A resolution awarding the bid for Hurricane Sally HVAC Repairs at the Orange Beach Event Center.
• Rescheduling a public hearing date for CoastAL Beach Development for a possible restaurant, green space and public parking on the Gulf near the intersection of State Route 161 and State Route 182. The new public hearing date is Dec. 15. This is a project being considered by Flora-Bama owners John McInnis and Cam Price.