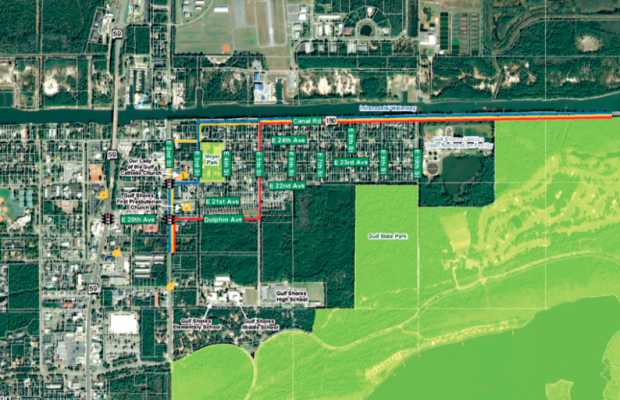 City looking at 3 options to eliminate Canal Rd. 90 degree turn
By John Mullen
Mayor Robert Craft said progress is being made narrowing down which route the city will pursue to eliminate the 90-degree turn at East Second Street and Canal Road.
The mayor gave updates during a city council meeting on that project as well as progress on getting state approval to build a medical facility on land the city owns west of the airport and just south of Cotton Creek Drive.
Assistant Public Works Director Noel Hand also gave an update on progress of work at the three school campuses as the first day of class looms for the city’s brand new school system.
“We have been working diligently on the east side of town and rerouting and any kind of improvements to 180 or Canal Road as that becomes a city street throughout this process,” Craft said. “We’ve got money from the Restore Act to improve that roadway and we’ll be working on that. We’re getting close to coming up with some strategy on what route we take. We’ve had public input meetings with the community on the east side and we’ve got a lot of good input and facts from them and we’ll get back to them fairly soon.”
Gulf Shores is also studying a new roadway on the north side of the Intracoastal Waterway to connect State Route 59 with the new bridge and spur road to the Foley Beach Express the state is planning.
“There are a lot of major transportation projects in place trying to get finalized and get to the point where we can report to you exactly what we’re doing on those,” Craft said.