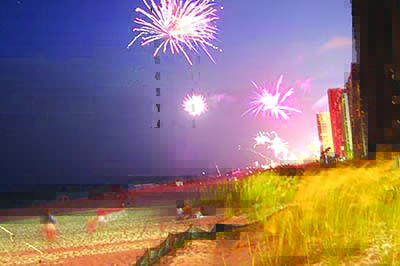 City of Gulf Shores cancels July 4 fireworks over coronavirus concerns
Due to potential health risks related to COVID-19, the City of Gulf Shores has canceled the 2020 Fourth of July fireworks. The decision was made in accordance with the current Safer at Home Health Order issued by Governor Kay Ivey, said G.S. Mayor Robert Craft.
“Unless we get some changes from the state and from the governor’s office about social distancing and us trying to get a permit to do that in the public waters and state waters and state beaches. Trying to get a permit we had to certify that we were able to monitor public safety,’’ Craft said at the June 8 Council meeting.
“When its dark and we’ve got specific corridors that people will funnel through to walk in and out we didn’t feel like there was any way we could safely certify that would could properly monitor social distancing. We’re able to watch during the day on the beach. We’ve got our police patrol going up and down, we’ve got our lifeguards going up and down and we’re asking people that aren’t separated to separate. Are they always social distanced? No, but we’re doing the best we can.’’
Angie Swiger of Swiger Properties addressed Council about the lack of public input involved in the decision to cancel the fireworks show.
“I think it’s a very big decision that impacts our locals, impacts our tourists in a big way and also impacts our businesses in a big way,’’ she said. “It was disappointing to hear that the fireworks were going to be canceled as a result of the virus because I felt like that we had done a very good job with (social distancing at the beach) that.
“I didn’t know if that was something that might be open to more consideration,’’ she added. “There are a lot of people who watch from balconies and cars. It seems like there ws maybe a way, there was some middle ground.’’
“We couldn’t get ourselves comfortable to sign a certification to the governor that we were going to monitor and make sure we had conditions where people could stay social distanced. We couldn’t do it as a municipality and weren’t willing to sign that document for a permit,’’ Mayor Craft said.
“That was the reason it didn’t come to the public debate. It wasn’t a public decision. We looked at it every way we could and other than leaving people in their cars which they wouldn’t stay. I would be afraid that we couldn’t come up with any process that was functional and still have it.’’
Craft said the city still has funds in its 2020 budget for fireworks and it could sponsor a fireworks show after the Covid pandemic restrictions ease.
“Maybe create another weekend of significance. Fourth of July hopefully will be busy and packed anyway,’’ he said. “I apologize. I wish we could have done something different but we just couldn’t find a way to make it happen safely.’’
The City still plans to celebrate July 4 by flying American flags and lighting up the city in red, white and blue.
••••••••
Beach Club, OWA, Flora-Bama, Perdido Beach Resort are July 4 fireworks options
By John Mullen
Peasure Island and South Baldwin County will have several options to view fireworks on Fourth of July weekend.
Making plans for their celebrations are the Perdido Beach Resort on the beach near Perdido Pass, and OWA on County Road 20 in Foley. The Flora-Bama on The State Line, and The Beach Club in Gulf Shores will also shoot fireowrks starting at 9 p.m. on Saturday, July 4.
Additionally, the Flora-Bama will sponsor a popular Ms. Firecracker Bikini Contest at 3 p.m. (Sign-ups begin at noon). The ‘Bama is also hosting a free Freedom Run race entry – complete with all the usual amenities – for its four-mile run and one-mile fun run at 8 a.m. on July 4. T-shirts are guaranteed for the first 500 registrants. The Wharf in Orange Beach also has plans in the works for Independence Day.