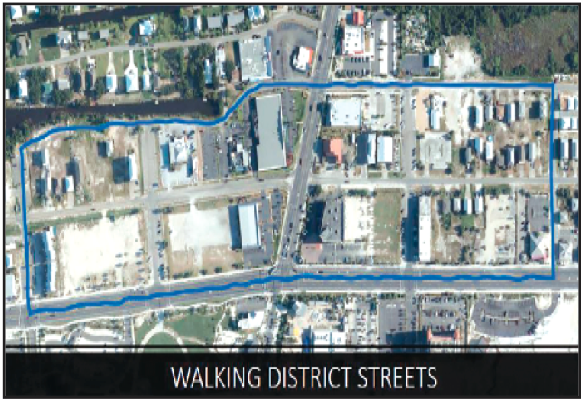 By John Mullen
During a city council meeting on Oct. 28, Gulf Shores officials gave details of how the $424,000 they will pay Volkert will help shape the beach district for years to come.
“We need to start thinking about how we can begin turning streets back into places—into destinations for culture, creativity and community,” the report said. “(The goal is to create a sense of place and maximize the right-of-way for the greatest public benefit.
Among the upgrades would be improvement to stormwater management in the district, better-defined travel lanes, increased and enhanced on-street parking, improving landscaping and make sidewalks throughout the area wider.
“It is not sufficient to design and build streets that are merely functional and safe for automobiles,” the report states. “We should align our greatest public asset with our economic goals because they are bound together. In an age when people are more mobile than ever, and cities and businesses compete to attract talent, residents, and tourists, great streets are essential to boosting economic development and tourism.”
Gulf Shores is taking advantage of two grants and some cash from the Embassy Suites hotel partnership to pay for about $2 million of the total project, Public Works Director Mark Acreman said.
“We’ve been awarded an $800,000 TAP grant for the sidewalk components,” Acreman said. “We received a $60,000 ACAMP grant for the master planning for the stormwater system. Then there is the $1.2 million payment for parking improvements that will be provided through the Embassy Suites development agreement.”
The district (pictured) stretches from East Second Street to West Second Street and from the beach to East Second Avenue and West Second Avenue.
Also during the meeting the council:
• Selected Skipper Consulting and authorizing the mayor to sign their proposal to perform a Traffic Circulation Study for the proposed realignment of Canal Road (State Route 180) in an amount not to exceed $31,800. This includes the area along State Route 180 from about East 16th Avenue west to the Regency Road intersection.
• Retired an old firetruck and donating it to the cancer charity group Guardians of the Ribbon Lower Alabama Chapter. The group is dedicated to spreading the “Cares Enough to Wear Pink” Campaign, and they help raise awareness for all women and their families in their fight against cancer of any kind. Money raised is kept local to help our families as they fight disease.
• Authorized staff to pursue the Rebuild Alabama 2020 Grant to secure up to $250,000 in grant monies to fund the construction of a new mast arm signal at East Second Street and State Route 182.
• Approved a change order in a contract with Bagby & Russell Electric for $41,000 to include some additional work to the $1.5 million original contract signed in 2017 for signal work on State Route 182 from East Fourth Street to West Sixth Street. The new work included adjusting signals at East First Street to improve the alignment of the bike lanes, installing aluminum bases for controller cabinets, performing directional bores and installing conduit to all of the median islands for irrigation and palm tree up lighting and signal upgrades at State Route 135 to accommodate the Gulf State Park Lodge traffic.
• Issued assembly permits for Gulf Shores United Methodist Church for an annual family event at Meyer Park on Nov. 11 and for the Bama Beach Pickleball Club’s tournament Nov. 15-17 at the tennis center.