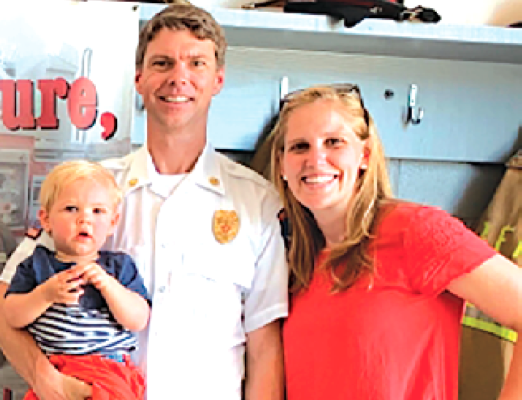 Firefighters, friends, family and city officials recently threw a surprise retirement party for Orange Beach Fire Dept. Chief Justin Pearce who will step down from his position this month. Chief Pearce will be moving with his wife Dr. Stephanie Pearce and their son Hayden (pictured) to Colorado, where Dr. Pearce will be starting a fellowship for pediatric orthopedics.
“We’re sad to see him leave but wish them the best,” Mayor Tony Kennon said. “He has helped lift the department to new levels and the community is so much better for it.”
Chief Pearce started his firefighting career in Orange Beach at the age of 15 as a volunteer cadet and then became full time in 1997. From there he went into fire prevention then was promoted to lieutenant, followed by captain and battalion chief. After the resignation of Chief Shane Phillips 2017, Pearce agreed to serve as interim chief and then chief in February 2018.
Chief Pearce credited all of the Orange Beach firefighters, leadership and staff for making the department what it is. “You guys are what makes this department work,’’ he said. “And thank you to Mickey Robinson, the first fire chief. He took a chance on hiring me and I don’t know if I ever lived up to his expectations but I try to every day.’’
“You became chief during a very tough time for us and through your strength and through your determination and your skill, we all recovered and we are stronger and better for it,” City Council Chairman Pro-tem Annette Mitchell said.
City Administrator Ken Grimes added that Chief Pearce has proven his integrity and strengths during his tenure.