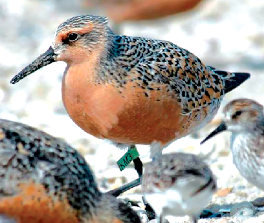 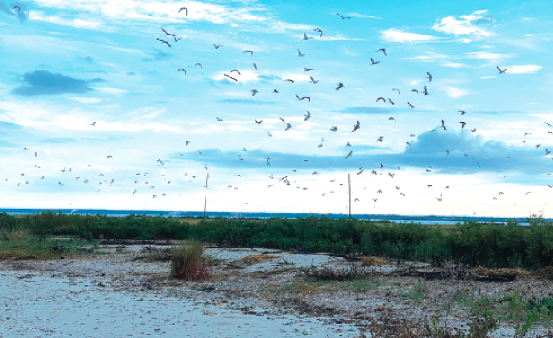 Coastal Alabama home to treasure trove of avian species; Alabama uses ReStore funds to acquire The West End of Dauphin Island
By Taylor Pool
U.S. Fish & Wildlife Service
A major milestone on the path to restoring the Gulf of Mexico was marked recently as the state of Alabama acquired the West End of Dauphin Island. The acquisition conserves habitat for coastal bird populations that are dependent on the area.
The Dauphin Island West End Acquisition project was approved as part of the Alabama Restoration Plan III and Environmental Assessment in December 2019.
The 840 acres is a diverse coastal habitat made up of dunes, marshes, and beaches. Sea turtle and several bird species use these habitats for nesting. Migratory birds use the area as a prime resting spot during migrations. The Service’s team will work in close coordination with the State of Alabama and Mobile County to restore this valuable property.
“Public ownership of the West End of Dauphin Island will allow for the protection and management of its habitats,” said Chris Blankenship, Commissioner of the Alabama Department of Conservation and Natural Resources. “Through the collaborative work of the Alabama Trustee Implementation Group, and the local stakeholders, the acquisition of this land will have a tremendous benefit for coastal and water birds injured by the Deepwater Horizon oil spill.”
Among the bird species present at the West End are the piping plover and red knot. These two shorebirds are a threatened species within their Alabama range, and are protected under the Endangered Species Act. Piping plovers frequent Alabama’s quiet shoreline throughout fall, winter and spring. Red knots are known for their more than 9,300-mile annual migration, one of the longest-distance migrants in the animal kingdom. Conserving this parcel of land will ensure that the sensitive coastal habitat is protected for years to come.
Tracking birds on the go
Conserving bird habitat is vital for species conservation, but so is knowing where Alabama’s coastal birds are going and staying. A project to track seasonal movements and habitat use of two species of colonial wading birds is providing valuable information for future planning to restore wading bird species in Alabama still recovering from the Deepwater Horizon spill. The project relies on the use of electronic transmitters attached to captured birds.
The project has been underway since last July. Biologists will use the information to better understand important colonial wading bird foraging, resting and nesting areas in coastal Alabama which will allow for more efficient and effective restoration.
“This project gives us an important way to understand the many impacts that affect colonial nesting wading bird populations, including human disturbances such as the Deepwater Horizon spill. The data provided through this project will help us to more effectively restore bird species injured by the spill,” said Kate Healy, a Service biologist who works in the Gulf restoration office.
Working with our partners to conserve the flyways, stopover areas, and nesting habitats for Alabama’s coastal birds is just one of the ways U.S. Fish & Wildlife Service is collaboratively restoring the Gulf. An abundance of birds call Alabama home, as the “Yellowhammer State” refers to the common name for the northern flicker woodpecker, the state bird of Alabama.
Specifically, coastal Alabama is home to a treasure trove of avian species that nest on the beach and use the area for stopover on their migratory journeys around the world.
The Gulf’s coast is subject to battering from hurricanes and storm surge, land loss from a lack of sediment transfers, and increased development — making coastal restoration projects all that more important.
The incredible amount of bird habitat is good news for outdoors enthusiasts. Birding trails and hunting opportunities are prevalent, and birding as a sector of tourism is huge. Roughly $17.3 billion is spent on wildlife-watching trips and related expenses, with an estimated 20 million Americans traveling for birding.
“While our 32-mile stretch of sugar-white sand beaches is what draws people to Gulf Shores and Orange Beach, the broader nature and outdoors are part of our core marketing focus, especially in the last year with the COVID-19 pandemic,” said Beth Gendler, CFO of Gulf Shores/Orange Beach Tourism. “We learned during the Deepwater Horizon oil spill just how vital it is that we protect our special environment for residents and visitors to enjoy and appreciate in the future. Birding and bird conservation efforts are a key component of this because our area is part of the winter and spring migration routes.”
The U.S. Fish and Wildlife Service’s (Service) Gulf Restoration Office biologists are focused on land restoration, while also looking to the sky — literally — as they track birds’ migration patterns.
Dauphin Island’s West End
Amid settlement negotiations and cleanup efforts from the 2010 Deepwater Horizon oil spill, one spit of land remained in focus for biologists. Roughly 840 acres of coastal habitat, which until recently was privately owned, is known as the West End of Dauphin Island. The U.S. Census Bureau has designated the area as 166-square-miles, which includes about 96% open water that is invaluable habitat for coastal birds.
Pictured: Red knots are one of the two bird species listed as threatened who frequent the West End of Dauphin Island; A mist net is placed behind a nesting colony enables biologists to capture and band birds for the telemetry study.