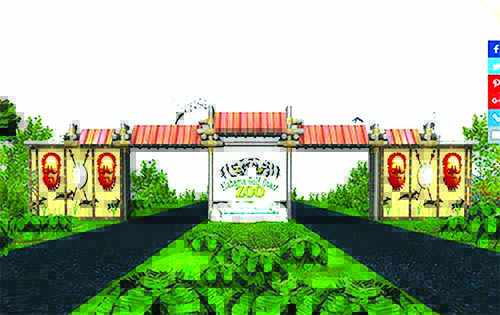 The official groundbreaking for the future home of the New Alabama Gulf Coast Zoo north of the Intracoatal Watweray (20499 Oak Rd.) in Gulf Shores was held on March 13. The groundbreaking officially kicks off construction of the 25-acre zoo as it has received long-awaited funding from the issuance of a construction bond, allowing the zoo to be built through completion in late 2019.
The groundbreaking ceremony will also serve as the launch of he Alabama Gulf Coast Zoo’s new capital fundraising campaign, Build Your Zoo, which provides complete details about the new zoo project at buildyourzoo.org.
As the first ZAA-accredited U.S. zoo to be built from the ground up in more than 20 years, the zoo will be able to not only provide a more spacious modern haven for our more than 600 animals at its new location. The complex will also include theme-park family entertainment, event venues, gourmet dining, shopping and educational programs.
“Hurricanes, tropical storms, the recession, the oil spill. We aren’t called The Little Zoo That Could for nothing. We are definitely survivors, but it’s time to move to higher ground and become The Little Zoo That Grew,” said Patti Hall, Zoo Director and relentless visionary for the complex.
A private investment firm purchased $26.26 million in tax exempt bonds that will fund the zoo’s expansion to it new facility on 25 acres off County Road 6 East. The land, 4.3 miles north of the current location, was donated by the Weir family back in 2006. The bond money will also be used to purchase 71 acres adjacent to the current property.
A Monkey Island exhibit has already been built on the new property, and the Aquascape Pond Squad of TV fame created a showcase water feature near the new zoo’s entrance.
The zoo has also secured a $1 million grant from the City of Gulf Shores payable upon completion of construction, which could come as soon as June of 2019. The grant from Gulf Shores will help with the zoo’s operational expenses during the transition. That process could take as long as five months and would not occur during the summer tourist season when the zoo’s parking lot is always full.