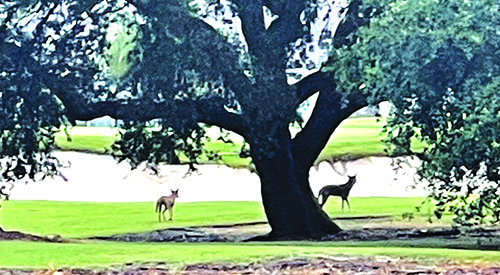 Coyotes Play Early Round At Craft Farms
A Next Door Neighbor participant (Robert Reynolds) posted a picture of two coyotes spotted on #16 fairway of Craft Farms Cypress Bend golf course earlier this month. Coyotes have been spotted all over Baldwin County, from Bear Point to West Beach, Fairhope to Lillian. Most coyotes avoid people. They may mistake small, unattended pets as prey or attack large dogs they view as threats to territory or dens. Hazing usually sends them away. Coyotes are successful at surviving and even flourishing in the presence of people because of their adaptable behavior and social system. They typically display increased reproduction and immigration in response to human-induced population reduction.