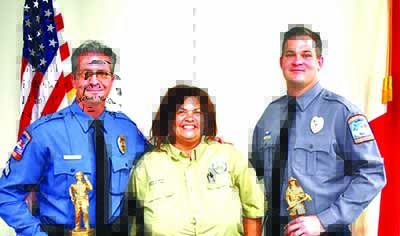 By Marc D. Anderson, City of Orange Beach
At the recent Orange Beach Community Center Association police and fire awards ceremony, Firefighter Daniel Epperson was named the 2020 Firefighter of the Year, Cpl. Carter Lowery earned the 2020 Police Officer of the Year award, and Animal Control Officer Tiffany Long was named the police department’s 2020 Civilian Employee of the Year.
Firefighter of the Year – Daniel Epperson
Epperson was Firefighter of the Fourth Quarter of 2019 and Firefighter of the Third Quarter for 2020. Blake Hartley earned Firefighter of the First Quarter and Fire Medic Johnnie Sundie earned Firefighter of the Second Quarter.
“In April, the Fire Department received a dispatch for one unconscious shortly after shift change in the morning,” Fire Chief Mike Kimmerling said. “Firefighter Daniel Epperson was on his way home after being relieved of duty and received the call over our Active 911 app on his phone. He was in the vicinity of the call location and responded directly; notifying our responding unit he was doing so. He arrived first on scene and initiated lifesaving measures, including CPR for the victim and assisted the arriving crews with transports and got this victim loaded up.
“Firefighter Epperson also responded to a swimmer in distress call under extremely high and rough surf conditions. It was a red flag day with extremely rough conditions out in the Gulf. The conditions were severe enough that the Officer in Charge had already determined that we would not be able to respond offshore with our boat. Unfortunately we then received a call for multiple swimmers in distress and sent multiple rescuers in the water. That would be our Surf Rescue division. The Officer on scene asked if Station 2 could get our water assets out of the pass due to the situation. Fire Boat 2 and both skis headed to the pass with Fire Boat 2 remaining inside. Both skis navigated through and to the rescue location. By this time the victims had been removed to shore, but two of our rescuers remained in the water. Firefighter Epperson picked the first rescuer up and brought him to shore, the second rescuer was caught in a heavy rip current and brought him back to shore. Firefighter Epperson did this under extremely heavy and unpredictable surf conditions. The rescue personnel he assisted were in extreme danger in this situation. Firefighter Epperson’s heroic actions and skilled use of the ski under extreme conditions were critical factors in making sure the outcome in this situation was positive. So I’d like to ask Firefighter Daniel Epperson to step up here.”
Epperson thanked his wife and family for always supporting him. Be it overtime or extra weekend or holiday shifts, he said his wife always has his back. He went on to say that a hat could be filled with names of Orange Beach firefighters and any name that was picked would be equally deserving of the award.
“So it’s truly an honor to get it,” Epperson said. “And I want to thank the mayor and City Council for all the support they give us to let us go to classes and train. It really means a lot and helps us out. Thank y’all.”

Police Chief Steve Brown said in selecting Carter Lowery, he was honoring a long-time city employee not only for his service to the police department but to the city and community.
“Since 2010 he has progressed to the rank of corporal and he’s also our supervisor over a very important program to this community in our schools and that’s our school resource officers.”
After handing Lowery the award and the applause died down in the Community Center, Chief Brown looked over at Carter and said, “Carter has done an extremely good job in carrying on a tradition that was set forth by Cpl. Joey Brown and David McLain as an SRO, but Carter has taken this to a whole other level.”

“And we also now have the middle and high schools that we’re going to be striving to get the Attorney General’s award of excellence like we have for the elementary school,” Chief Brown added.
“Carter has an overwhelming desire to keep the children of our schools as safe as possible. And his attention to detail in knowing who’s on campus or who belongs where is amazing. I admire you for your ability to be a good dad, good grandpa, good husband and do this job. And I appreciate it.”
Chief Brown also recognized everybody wearing a uniform that night.
“You wear the shoulder pads of the Orange Beach Police Department,” Chief Brown said. “This community appreciates the job you do.You don’t hear it enough. I try to tell you that but I’m doing it right here in a public forum. I appreciate every one of you and I’ve told every one of you I work for you. You don’t work for me, you work under me but you work for the City of Orange Beach and that’s the people you serve and that’s the people you work for.”
Cpl. Lowery thanked his wife. “She’s my biggest cheerleader and I can’t say enough,’’ he said.
“I have to thank Patrol for all the help that they give. I have to thank Support Services. These guys come out and they help me. They help the entire unit anytime we need someone for traffic control, need vehicles moved. I’ve got to thank my guys who work under me because I couldn’t do it without them. So I want to thank Matt Simmons and Caleb Winfield for being the amazing individuals that they are. These guys reach out and build relationships with all of these children and they are super good at it, guys. And it is at times I have to say I am in awe of them in the way that they are able to get that part of the job done.’’
He also thanked principals, teachers and school staff, saying they work together very well. “And again that partnership is stronger now than ever and we get nothing but support and cooperation from our school. It is just an outstanding working relationship. And I’m very proud to say that right now.’’
He also thanked the mayor and council, for their leadership and support.
“This community is amazing. It’s an honor to serve in this capacity in this community,” he said.
Civilian Employee of the Year – Tiffany Long
An Orange Beach Animal Control Officer, Long has been with the deapartment since 2017 and was able to fill big shoes when Tom Conerly left as Animal Control Office.”
ong was more than an Animal Control Officer during Hurricane Sally. “Anything that needed to be done, she was there,” Chief Brown said. “And typically you’re not having to ask for it to get done, it’s just getting done because she saw a need and recognized that and just got it handled.”
“This is just such a wonderful community,” Long said. ‘We do have a great partnership and everyone here is a team and I mean I can’t do what I do without everyone else. Every single day I wake up and want to go to work. It’s really an honor. And everything starts at the top and goes down.”
Hurricane Sally response recognition
In addition to the annual awards, Chief Kimmerling took the opportunity to recognize the city’s response to Hurricane Sally, and recognize the sacrifices first responders and their families make so the community can be kept safe.
“Y’all know this hurricane was quite an event for the city and for the community,” Chief Kimmerling said. “It was also quite an event for both the police and fire departments in the community. …

“Our crews rescued multiple victims from their homes while battling extreme elements and without any hesitation and regards for their own personal safety. We had over 120 calls in less than six hours. So, I again want to credit the teamwork approach with the police department and their [all-terrain] vehicle and our staff.
“Our staff operated in zero visibility, water conditions, people calling and I’ll tell you, there were times when we should have suspended response but we didn’t. And the reason why we didn’t is because we all knew that no one had an opportunity to get out. So we had to make those calls. And it was tough. I can only credit the staff and tell you how brave and how much the actions of those involved, especially on that night were. We’re going to be issuing the Medal of Valor to the members of the department who were involved with those rescued. And there’s quite a few of them because with the size of the department, two thirds of the department was here that night.”
Those receiving the Medal of Valor: Asher Michon; Zach Lavender; Will Hearn; Caleb Terry; Ben Pelt; Brian Cranford; BJ Rye; Kellie Spence; Jeremy White; Michael Osborn; Hunter Williams; Jordan Flynt; Brian Hester; Blake Hartley; Jake Lambert; Nicki Fontaine; Jeremy Lewis; Robert Simpson; Chad Hartley; Blakely Douglas; James Kinkead; Tyler Newkirk; David Grant; Saylor Hammett; Jim McMurry; Austin Lesinger; Noah Parker; Aaron Saenz; Joseph Driggers; Dray Resmondo; Kevin Lanford and Brian Turk.
“And I will just tell you,” Chief Kimmerling said, “what happened that night was just nothing short of amazing. And I just thank God that they are all with us here today because it was a very, very, very difficult night. Not only for the people being rescued but also for the rescuers who made those efforts.”
Chief Brown said the departments work extremely well together. “There is an overwhelming spirit of cooperation among those departments,” he said.
Mayor Tony Kennon said he doesn’t think epople realize just what the city’s officers and firefighters went through on the night that the eye of hurricane Sally sat directly over Orange Beach for around three hours, responding to scenes with flying debris and wading through chest deep flood waters. He said some of the rescued families he saw that night at the Community Center told the story.
“It’s all a blur but it must’ve been 3:30 or 4 (a.m.),” Mayor Kennon recalled. “Anyway some of the folks they rescued were here and if you wondered what a shell-shocked soldier of World War II looked like, that’s what these people looked like when I walked in and saw their faces. They didn’t know what happened. There were some of them that literally thought they were fixin’ to die. That’s not an exaggeration, that not just me, they thought they were going to die and these guys came out of nowhere.
“I’m telling you, guys, and when they go into the surf the way some of these guys do, I’m telling you they don’t get enough credit. All of them. Our police department was right there with our fire department. It’s better than it’s ever been and there’s not one person or place to look at it’s just divine intervention as far as I’m concerned. And it’s who we are and what we are. And it shows in our police and fire and, dadgum, y’all are a brave bunch of guys and ladies. I appreciate y’all.”
Pictured: Carter Lowery, Tiffany Long, Daniel Epperson; (below) Orange Beach Community Center Association police and fire awards ceremony.