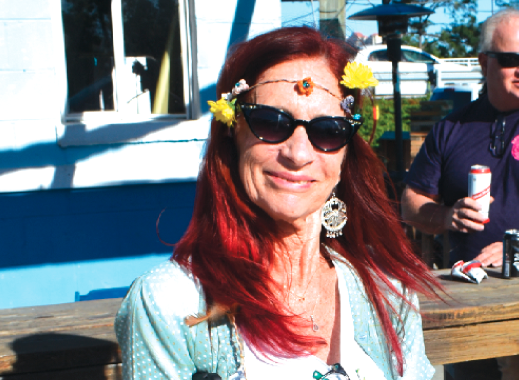 By Fran Thompson
Carolyn Hall was not selling tie-dye tees and water pipes on premise when David’s Gallery opened in 1969, but she has been the driving force behind the business for 41 of the 50 years it has welcomed patrons, first as Sunburst in the Bayou Village Shopping Center, to Gulf Shores.
Now located a few hundred yards closer to the beach on Hwy. 59, David’s Gallery is named after Carolyn’s former husband and business founder, David Atwood, who left town and the business almost 30 years ago.
Carolyn tried to track David down to return for April’s 50th anniversary celebration to no avail. “We couldn’t make it happen,’’ she said. “I believe he is somewhere in Colorado. It would have been nice to have him there. maybe bring him in on a float. We still sell t-shirts that say ‘Dave’s Not Here ‘Mon,’ like the old Cheech and Chong skit.’’’
Carolyn opened what was the first yoga center in Alabama upstairs at David’s Gallery in the early 1980’s. But she was not able to advertise it as such.
“The city would not allow me to put the word yoga on a sign,’’ she said. “They wanted me to call it stretch-n-relax or limbercize. I felt like that would have been prostituting myself. It is based on 3,000 year old principles, but people perceived it as undermining Christian values. It was the same with classes I taught at the Mobile YMCA. I would start every class by saying this is Y-O-G-A. Now churches even offer yoga.’’
It was six or seven years before Carolyn was finally able to put the word yoga on a sign. “I just went on word-of-mouth,’’she said.
Smoking accessories are still a big seller at David’s Gallery. And clothing, poster and incense sales add to the bottom line. But more than anything, tourists come in for tattoos and/or piercings during the summer season.
Topping sales over a 12 month period is CBD oil.
“Not many snowbirds get tattoos. But they love CBD oil. It is really popular with them. Even in the summer we are making cookies and brownies with CBD oil every day,’’ Carolyn said. “I don’t know if it is going to run its course. But it is really trendy right now. People know that all CBD oil is not the same. We are the only business around that sells it right now. But I expect that in another year it will be in Wal-Mart and Rite-Aid.’’
Carolyn said she has no plans to retire or sell her longtime business, noting that the Pleasure Island community has evolved since she was prohibited from advertising yoga classes.
“People in general are a lot more accepting now,’’ she said.