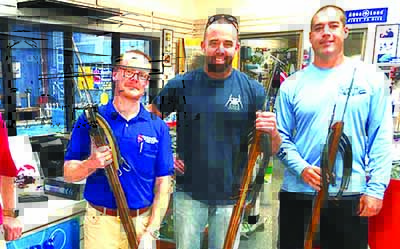 A group of Birmingham based scuba divers came in contact with a great white shark about 25 miles in 100 ft. of water off the coast of Orange Beach while spearfishing over Memorial Weekend. Chase Tucker was operating a camera while fishing with JoJo Bates and Forrest Phillips when he spotted the shark that he recognized as a Great White by its massive size and characteristis and tried to alert his friends, Forrest Phillips and JoJo Bates.
“I saw another mangrove snapper and shot it. And I hear him saying, ‘Good shot, good shot, good shot.’ Really, he wasn’t saying good shot at all. What he was saying was ‘Big shark, big shark, big shark,” Phillips, a diver and president of Southern Skin Divers Supply in Birmingham, told Brian Pia of ABC 33/40 upon returning home.
“I was probably the only one in the water at the time that did not realize it was a great white. So, probably, ignorance is bliss at the time for sure,” Bates said.
The men told Pia they estimated the shark to be 12 ft. long and it came to within 30 ft. of them. But they didn’t panic and the shark never acted aggressively.
“When you first see something like that. It’s almost if you’re in a dream-like state. You know, it takes a minute to kick in. Like, ‘Hey man, wake up. That’s a white shark,” Tucker said.
“You can get in the vessel with your fish and say, ‘Hey, Saturday, What did you do? We’ll you were cutting your grass. Well, I was down with a great white shark,” Phillips told Pia of ABC 33/40 during an interview at Southern Skin Divers Supply.