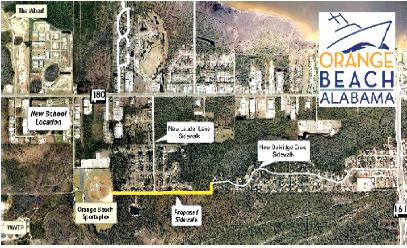 By John Mullen
A new sidewalk project by Orange Beach will connect two neighborhoods to the Sportsplex and have some unintended – at its inception anyway – bonuses with connections to the new school campus as well.
“It’s just a great project,” Community Development Director Kit Alexander said. “I love this project. It couldn’t have worked out better. We started this project even before we knew the school was going to happen. It was sort of like serendipity.”
A recently completed sidewalk from Alabama 161 on the east to the end of West Oak Ridge Drive will be extended through a wooded area between there and the Sportsplex. Alexander said it is expected to be finished and ready for use around Aug. 1.
“If you live off of 161 or if you have access to the 161 sidewalks you will then be able to get to the school directly through the sidewalk,” Alexander said. “We just built the sidewalk on Lauder Lane and it connects to the sidewalk on Lauder Lane, too. So, if you live in Lauder Place, you’ll be able to connect to the sidewalk and get to the school also.”
Not only does it make those connections but it also connects to the Branyon Backcountry Trail’s 28-mile network. It connects to the Fort Morgan Trail in Gulf Shores and soon, with the completion of a $4.4 million Restore project, it will reach all the way to Mobile Bay.
“Having the Oak Ridge sidewalk extension to the Orange Beach Sportsplex is a perfect example of the city’s commitment to connecting our entire community with sidewalks and paths,” Mayor Tony Kennon said.
“Our forward-thinking staff spearheaded the first paved paths in Gulf State Park that have evolved into the Backcountry Trail and it is all coming full circle by tying in our neighborhoods with the entire island’s trail system.”
The city’s traffic problem child is Canal Road, especially during the busy summer season. The state is going put the project to finish five-laning Canal Road out for bid on June 28 with an estimated completion date of December 2020. This sidewalk extension, Kennon said, provides an alternative to the busy thoroughfare for residents.
“This new Oak Ridge sidewalk project runs parallel with Canal Road from Orange Beach Boulevard or Highway 161 westward to our new school location avoiding Canal Road as one of the busiest routes in the county, yet providing the same destinations for users,” Kennon said.
To make the extension happen the city first had to obtain a small right of way to get over to Gulf State Park property and an easement they city used to add an input line to the wastewater treatment plant. The majority of the sidewalk will run atop that easement.
“The First Baptist Church of Bay Minette provided the necessary easement at the west of West Oak Ridge Drive to make the connection to the Gulf State Park property to the south,” Alexander said. “Without this easement, the project would not have happened. We are very appreciative.”
The sidewalk will be eight feet wide and travel about 4,000 feet to William Silvers Parkway. It connects to Lauder Lane with a five-foot sidewalk. Total cost on the entire project is just under $347,000 and construction is underway.