Embassy Suites now set to open in spring of 2022 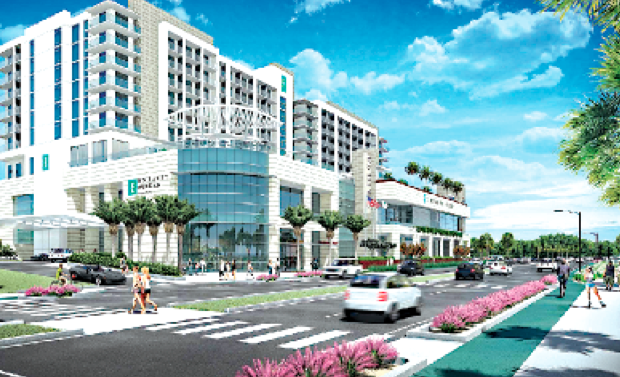 Embassy Suites now set to open in spring of 2022
$85 million mixed-use development at the corner of West Beach Boulevard and West 1st St.

The Embassy Suites in Gulf Shores, originally scheduled to open in late fall of 2021, has tweaked its timeline and now plans for an opening in the spring of 2022 on the cusp of the coming busy summer season.
So, instead of a July 1 start date the developers asked to begin the project in January of 2020 with hopes of being fully up and running by March of 2022. No ground has been broken on the project that is on the north side of beach road directly across from the city’s newly redesigned Gulf Place. The empty lot is directly behind an Alvin’s Island beach store and most recently used as a staging area for equipment helped to set up the annual Hangout Music Fest.
Gulf Shores Economic Development Coordinator Blake Phelps said all of the preliminary paperwork has been done and the plans are up for review by the city’s planning commission.
“They have completed all site investigations, geotechnical, environmental, survey and all those type things on the site itself,” Phelps said. “They are working toward completing construction drawings for our review and for Hilton’s approval.”
Part of those plans include a 7,800-square-foot ballroom and a total of 11,000 square feet of meeting space the city asked the developers to include adding another conference venue in the city.
The hotel will have 229 rooms, a full-service spa, indoor pool and fitness center. Topping it all will be a 23,000-square-foot rooftop with views of Gulf Place beachfront and It will include a bar open to the public and a pool for hotel guests.
“We’re going through the site plan review process right now,” Phelps said. “They’re tracking for the planning commission for June as long as everything continues moving forward in our internal review and I truly expect that it will.”
Gulf Shores will give Embassy Suites a tax rebate of 42 percent during the first three years of operation and 35 percent every year following until $6.5 million is reached. Or the basic cost of adding more than 11,000 square feet of meeting space including a 7,800-square-foot ballroom to the project.
“You always want two or three months of ramp-up time to let your staff get oriented and work through any operational kinks before you really hit the busy, busy part of the season,” Phelps said. “But six to eight months of that is not desirable.”
Phelps said a new member was added to the development team and first raised the concerns about opening in the slower part of the tourist season.
“Since the original development agreement was approved back in July the original developers formed a joint venture with a development group called Woodbine Development Corp. out of Dallas,” Phelps said. “They came back and suggested we shift those dates.”