End of the Road Play Festival was a sucess 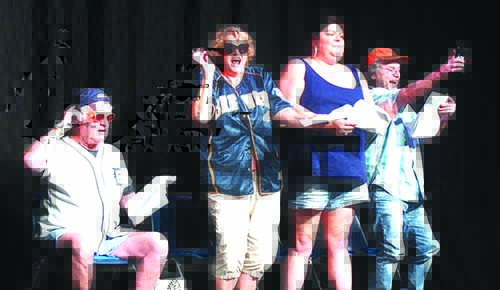 Founder Laura Pfizenmayer was, as usual, ebullient when describing her baby, the End of the Road New Play Festival, which celebrated its fourth birthday at South Baldwin Community Theatre in July.
“It was a resounding success,’’ the Gulf Shores resident said. “You can definitely use that word – resounding. It was the first time we used the outdoor stage for a performance, and it was perfect from the acoustics to the audience to the ice cream sundaes we passed out during intermission.
“The quality of the plays was also excellent. The playwrights all had a good time and everybody involved is already excited about doing it again next year,’’ she added.
The Daniel Guyton and Colin Thon co-authored play, “My Father’s Flag,” was selected as the Judge’s Choice. Thon is himself a disabled vet, and the writers used three different vets from three different wars to talk about how proud they were to have served.
Marilyn Millstone’s “Compos Mentis” was presented the Audience Choice award during a catered closing reception that followed the three show run.
“I would have to say “My Father’s Flag” was one of the highlights,’’ Pfizenmayer said. “It was just a wonderful play. Everybody went wild for it. There was not a dry eye in the house when it was over.
“But all the plays were good,’’ Pfizenmayer added. The festival included submissions from Washington State, Washington D.C. and Atlanta.
“We were also pleased to have a student entry from Gulf Shores High School. We definitely want to include that again next year,’’ Pfizenmayer said. This year’s student production was “Witchy Woman” written by Laurent DeShazo and directed by Ali Livingston.
The eight plays selected for the fest were culled from almost 100 entries and performed by local actors. The directors were also local. A stripped down theater approach was implemented, with minimal props and stage production. Plays submitted may not have had prior productions.
The short play format is gaining traction around the nation and Pfizenmayer hopes this kind of event may inspire the community to get involved in local theater.
“We have a wonderful theater here. People have supported this, and that’s wonderful,” Pfizenmayer said.