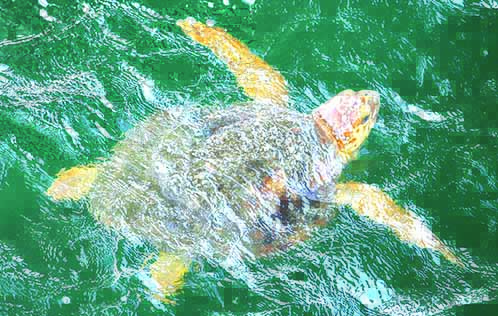 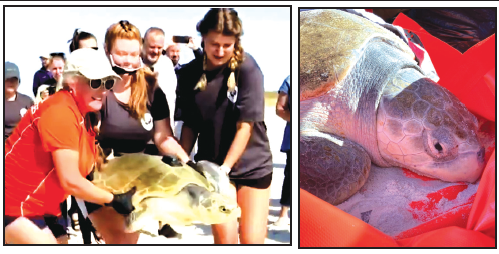 A rehab team from the Institute for Marine Mammal Studies in Mississippi, with assistance from staff at the Orange Beach Wildlife Center (above), released a Kemp’s Ridley sea turtle back into the wild in Orange Beach on Nov. 3 after treating the endangered species for two weeks. The turtle was accidentaly hooked by a surf fisherman. Orange Beach Coastal Resources staff responded and recorded the initial data. The IMMS staff attached a satellite tracking device on the turtle’s carapace before releasing it.
Three days later, Nov. 6, three 100 lb. sea turtles, including a Kemps Ridley, after rehabing at the Gulfarium Marine Adventure Park in Fort Walton Beach, were released into the Gulf at Perdido Key State Park. Each of those turtles swallowed fishing hooks that got stuck in their esophagus at the Okaloosa Island Fishing Pier in Fort Walton Beach. The Florida Fish and Wildlife Conservation Commission determined Perdido Key was the best location for the release and idenitification tags were placed on their flippers.
A third turtle, a fully grown loggerhead, was released into the Gulf at Guf State Park Beach Pavilion on Nov. 12. This sea turtle (below) was rescued at Gulf State Park on August 13 and was transported to Gulfport where it underwent rehabilitation at the Institute for Marine Mammal Studies.
To report a nesting, injured, or distressed sea turtle, call the Alabama Sea Turtle Hotline: 866-SEA-TURTLE (866-732-8878).