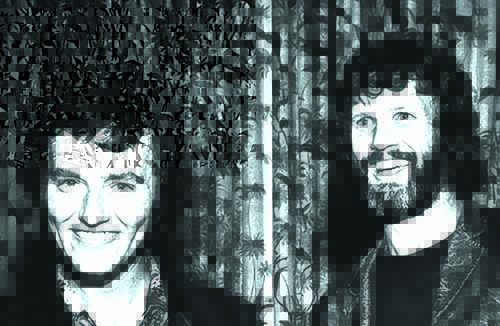 The New Malibu Lounge in Warrington and the Flora-Bama Lounge on Perdido Key, in conjunction with the Frank Brown International Songwriters Festival (FBISF), will host the Mickey Newbury Gathering from Thursday, May 18 through Sunday, May 21.
Newbury performed many times at the FBISF. After his passing in 2002, a number of fans decided to have an annual gathering to honor him and his music. Originally staged in this area, the gathering moved to Texas for several years, but, led by FBISF founder Joe Gilchrist, it returned to the Gulf Coast in 2016, and Mickey’s fans from all over the USA responded.
Inducted into the Nashville Songwriters’ Hall of Fame in 1980, Newbury has had his songs covered by hundreds of artists. Tom Jones, Elvis Presley, Kenny Rogers & The First Edition, Andy Williams and Eddy Arnold all had hits with his work. Over a 35 year period, Mickey recorded 25 albums, earning critical acclaim and legendary status among his fellow songwriters.
Mickey, Barbara and Felix Manion from Baird, Texas will be participating in the event by bringing their BBQ trailer to the New Malibu. The Manions will serve BBQ all weekend (in addition to the menus at the New Malibu and Flora-Bama).
Performances will take place at the New Malibu Lounge, located at 1000 Gulf Beach Hwy., from May 17-21.
An added attraction to the event will be the May 20 Tribute To Fallen Heros special event at the FlorapBama, located on the Gulf of Mexico on the Al-Fl state line, will be dedicated to the music of other members of the FBISF songwriter family who are no longer with us. Attendees will be treated to the sounds of the songs of Wayne Carson, Hank Cochran, Mike Fincher, Larry Henley, Red Lane, Rusty McHugh, Jody Payne, Freddy Powers, Larry Jon Wilson and others on the ‘Bama main room stage from 2-6 p.m.
Gilchrist was a fan of Newbury’s for 25 years before, through mutual friend Bo Roberts, he was able to recruit the songwriter to the area from Oregon for two shows at The Flora-Bama in the early 1990’s.
“He had a record deal fall apart before that and he left Nashville swearing he would never step foot east of the Mississippi again,’’ Gilchrist said. “We talked him into coming for four days. The first time he came, he stayed for a month. The second time he stayed for six months.’’
Mickey’s son Chris, an accomplished musician and vocalist himself, lives on Perdido Key and will also be part of the gathering.
“It will be a songwriting smorgasboard for a lot of people who loved Mickey’s music,’’ Gilchrist said.
Gilchrist said the annual gatherings honoring Newbury have been held every year since he passed as the result of social media networking. Past gatherings have been held in Oregon, where Newbury moved after leaving Nashville, and his native Texas.
Born in Houston, Mickey pursued his songwriting dream after three years in the Air Force. He lived in a ’54 Pontiac and traveled around playing gigs and working on shrimp boats ‘til signing his first publishing contract in 1964.
In 1968, Mickey saw huge success; three number one songs and one number five – across four different charts; Just Dropped In (To See What Condition My Condition Was In) on the Pop/Rock chart by the First Edition, SweetMemories on Easy Listening by Andy Williams, Time is a Thief on the R&B chart by Solomon Burke, and Here Comes the Rain Baby on the Country chart by Eddy Arnold. This feat has not been repeated. For more info, contact FISSF coordinator, Andy Haynes at andy@fbisf.com or visit fbisf.com