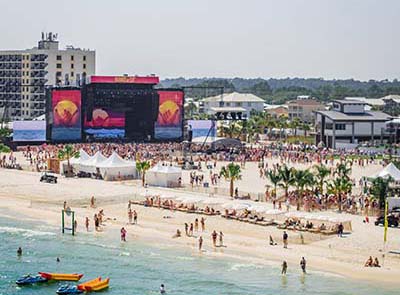 Fest has had negative impact on surrounding businesses
By Fran Thompson
Hangout Music Festival founder Shaul Zislin wants Gulf Shores to be the festival’s “forever friend.’’
Also the frontman for the companies that own a majority of the real estate in the vicinity of Gulf Shores Public Beach, Zislin used that exact analogy while speaking at a December gathering he organized to listen to grievances from residents concerned about traffic, noise, and unruly attendees associated with the fest.
During a 30 minute power point presentation, Zislin spoke at length about how the festival is a community event and a boom to local restaurants and retailers.
But just like much of the criticism about the “bad element’’ the fest attracts, that is not entirely true.
Some GSHS Career Academy students intern at the fest, and there are volunteer opportunities. But local community involvement is minimal.
Two restaurants directly across from the fest, Desoto’s and Crazy Donuts, did not even open for business in 2019. Desoto’s has the island’s most loyal local clientele. Hangout Fest is the only time of the year it was not busy.
Crazy Donuts owner Mark Frohlich said he tried selling cold beer along with his creative pastries and sandwiches from his parking lot for two years, but there were few takers. “The festival killed our business,” he said.
Bill’s By The Beach, which has since closed, set up a stand directly in front of a Hangout shuttle bus stop to sell bottled water and beer for one-third the price that those drinks would cost inside. There were few takers. By the time the kids depart those buses, they just want to make a beeline for the entry gates.
Dennis and Deborah Hatfield owned the iconic ice cream parlor Scoops for more than 30 years before selling the business this past spring. It is located a few hundred yards from the beach on Hwy. 59, across from Papa Rocco’s.
Dennis Hatfield said Scoops loses $5,000 in revenue during Hangout weekend.
“Ever since the festival started, we’ve seen a different crowd. We were used to catering to families getting an early start on vacations,’’ he said. “Even in the week leading up to the festival, it was slow. And once the festival started, it was dismal.
“I think it was (Gulf Shores City Councilman) Steve Jones who said, ‘if you open your doors, they will come.’ But that is not what we saw happen. I could expect to have at least $5,000 less revenue during the festival. And I scheduled and planned for that every year.’’
Hatfield said he did sell bottled water to attendees who wanted to use his for-patrons-only bathrooms.
“A lot of people were thirsty after parking and making a long walk down Hwy. 59,’’ he said, “and water is one of the cheapest items on the menu. So, it worked out.’’
Hatfield said a sink was ripped from the wall in the women’s room and he found the remains from a party behind his walk-in freezer out back during the fest. But for the most part, Scoops and its staff didn’t have any issues with fest patrons.
“We called the police on it, and they stepped up patrolling the area,’’ he said. “It’s nothing earth shattering or unusual. They are young just like I was. There are some bad apples. But most are well behaved.’’
Papa Rocco’s manager Jama Baker said she used to sell a good many jello shooters from a stand in front of the restaurant, but since LCB representatives informed her such sales were illegal, setting up a table in front of the restaurant to sell pre-mixed drinks has not paid off. Also, Papa Rocco’s has a dress code that prevents most of the festival crowd from entering the restaurant.
“I have nothing against the festival or kids having fun. But some of the outfits the kids wear are risque and we’ve always had a dress code. It’s not just for them,’’ added Papa Rocco himself, Bill McGinnis.