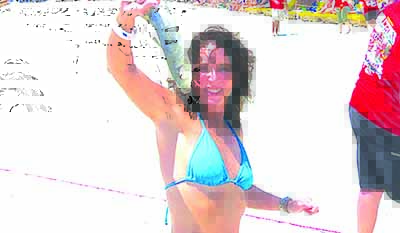 By Fran Thompson
Flora-Bama’s April 27-29 Mullet Toss weekend – officially The 34th Annual Interstate Mullet Toss & Gulf Coast’s Greatest Beach Party – starts with the Mullet Swing Golf Classic on April 25 and continues through the weekend (benefiting Multiple Sclerosis Society). 95KSJ will present the James Barker Band to keep the bash going in the Flora-Bama tent.
The Mullet Toss kick-off party begins Thursday with music on three stages from Wes Loper, Red Clay Strays, Velcro Pygmies, and Lee Yankie & The Hellz Yeah.
Adult fish tossing on the ‘Bama beach is from noon to 4 p.m. Friday through Sunday, with the kids’ toss at 10 a.m. each day. Finals start each day at 4 p.m. The $15 per toss fee includes a t-shirt (Proceeds go to local charities).
Cover charge to Flora-Bama begins at 9 a.m. each day from Friday through Sunday. Entry is $10 per day for 21 and up and $15 for 13-20 year olds, with 12 & under admitted free.
The party is open to all ages until 6 p.m., at which point the vent is for those 21 and up. Membership cards are good for entry to Flora-Bama for Mullet Toss. Cards are available online or at the door for $45 and are good for the entire event. The bar will be cash only for bar sales on Thursday, Friday and Saturday, with plenty of ATM’s available.
Tens of thousands of folks from throughout the nation & all walks of life will descend upon the crystal white sands of the iconic roadhouse for the three day frenzy of food, fun and frivolity.
Designed to attract tourism during the shoulder season, it’s now a 3-day event and one of the busiest weekends of the year contributing over $10 million to the local economy while raising over $25,000 for local schools and charities every year.
The main event consists of folks throwing a mullet, a mystical fish possessing a gizzard & one of the more plentiful and popular local fish, out of a 10-foot circle, from Perdido Key, Florida towards Orange Beach, Alabama.
Overall winners earn bragging rights, trophies, and gift certificates to local establishments. Trophies will be awarded 3-deep in 19 total age categories, male & female, for each day of toss.
Other events to include are Miss Mullet Toss bikini contests at 3 p.m. Friday & Saturday, with top finishers eligible for the $5,000 Miss Flora-Bama 2018 finals on Labor Day.
A special Mr. Mullet Toss Hot Body contest will be held on Thursday at 6 p.m., and Friday & Saturday at 1 p.m.
The midway section will include Venice Gelato, Maho Shades, Aviate Brand, Picker’s Vodka, Bacardi, Bacardi Oakheart, Jagermeister, Jim Beam, Sauza Blue Tequila and Grey Goose.
Music will continue throughout the weekend (see pages 32-33) and include the Big Earl Show, Foxy Iguanas, Johnny Barbato Trio, River Dan Band, Oliver’s Twist, Jo Jo Pres, Whyte Caps, Anthony Orio, Mario Mena Band, and Ja Rhythm.
Among the four eateries now on premise, the Flora-Bama Yacht Club, newly remodeled Flora-Bama Ole River Grill, The Tipsy Taco, and the original Flora-Bama Lounge and Oyster Bar on the Gulf will feature Tacos, Shrimp, Oysters, along with the famous Bama Burger and crawfish served by Mudbug Mafia.
There is no charge for parking and lots will be manned by local charities and youth sport groups. Due to heavy congestion, it is recommended that patrons take shuttles, which will be running at $5 per head non-stop starting 7 a.m. Friday through Sunday. Pick up spots are the Publix parking lot in Orange Beach and the Winn-Dixie lot in Perdido Key. You can also call a taxi in Alabama or a taxi in Florida and Uber or Lyft.
Local celebrities will toss out a few fish at noon each day, and there actually are rules for flinging mullets.
Contestants must select a mullet from the water bucket themselves. No gloves, no sand coating and no loading up a mullet with ballast before flinging is allowed.
All competitors must retrieve their own fish and return it to the water bucket. Stepping out of the circle before tossing or tossing the fish out of bounds are other no-nos. Tossers have only one chance to qualify for the finals each day. Those who can manage to throw more than 100 ft. have a good chance of placing.
Tossing techniques are as varied as the contestants themselves. For most, the best strategy is to fold the fish and pretend like you are trying to gun down a runner at the plate from center field.
Longtime competitor Wes Durham said at a past Toss that he likes to give his fish a pre-flight sip of beer. “Food for flight,’’ he called it.
Many Mullet Toss patrons will make condo and hotel reservations for 2018 while in town this year.
“They could come here on July 4th or Memorial Day or Labor Day. But they decide that something we created was going to be their weekend to have a party, and they come back every year,’’ said Flora-Bama co-owner Pat McClellan. “It’s a tradition for a lot of people, and they respect that tradition and respect each other.
“We have less problems with crowds at the Mullet Toss than during the major holiday weekends,’’ he added.
The Interstate Mullet Toss has been written up in the Wall Street Journal and hundreds of other major newspapers around the country. The event was also featured in Sports Illustrated.
For more info, visit florabama.com or facebook.