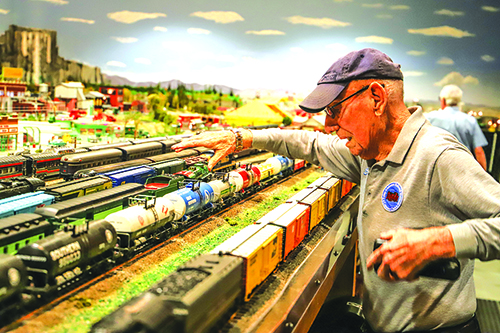 Foley’s Model Train Exhibit celebrates 15 years of operation
Editor’s Note: There is a very special attraction in Foley that celebrates model trains. The museum-quality exhibit is free and open three days a week in an annex built specifically to house the display adjacent to the city’s Railroad Museum, located at the corner of Hwy 98 and Hwy 59 (125 E. Laurel Ave.). The model train exhibit is operated by a talented group of volunteers called the Caboose Club and offers a quarter mile of track and one mile of wiring, along with numerous freight cars and passenger coaches pulled by a variety of engines. Visitor hours for the exhibit are 10 a.m. to 2 p.m. on Tuesday, Thursday and Saturday. Next door, The Foley Railroad Museum is housed in the Louisville and Nashville railroad station built in 1909. It contains exhibits depicting the days when Foley was a thriving agricultural center and how the railroad played a major role in its prosperity. Railroad Museum hours are 10 a.m. – 3 p.m. daily (closed Sundays).
The model train locomotives are operated by remote control. There are a number of different duties for Caboose Club volunteers, from interacting with the public to maintaining the trains and equipment. Anyone who is interested in joining the club is invited to fill out an application. Email cabooseclub@yahoo.com or call 251-943-1200.
By Doc Holiday
At the south end of the 60 foot model railroad layout a former military and American Airlines pilot is pulling the New York Central Broadway Limited into the station with bells ringing and model passengers waiting to board. Further down the layout a former paper company executive and retired Naval officer is watching the Union Pacific giant Challenger locomotive haul a consist of coal hoppers on one of the four mainlines. Other members active in electronic maintenance of 32 detailed locomotives include a Marine from Hawaii, a Michigan prison guard, a former radio station owner and puppeteer and the engineer of a “real” locomotive.
These six and a dozen others are members of the Caboose Club, an unlikely affiliation of volunteers who operate and maintain the model railroad rolling stock for the thousands of visitors to the Foley Model Train Exhibit.
That the Caboose Club continues to exist after more than 15 years is a testament to casual organization. The Caboose Club has no charter, no by-laws, no officers and no official status. The members meet monthly, but they don’t read or approve minutes of previous meetings. No one takes minutes of the meetings because there is no secretary. The club has no assets to track, so they don’t need a treasurer. “But the City gives us free T-shirts.” a member boasted.
The model railroad layout regularly runs four mainline trains, the kid-favorite Thomas the Train on the Evergreen addition and a miniature N-scale park train over a model of Bienville Square in Mobile, Ala. The bulk of the 32 original locomotives and more than a hundred passenger and freight cars were a gift from a Montgomery businessman who retired to Florida and couldn’t take his trains with him.
The entire collection was donated to the City of Foley with the only the stipulation that it be on public display without charge. The City built an annex to the Railroad Museum to house the display. The Caboose Club, at the time a group of friends who gathered weekly at the museum to watch train videos, stepped up to build the display and the elevated platform that overlooks the entire layout. Three original members of that club, and one who joined the first year of operation, are still active.
The finished display opened to the public on Feb. 15, 2007. The Club is celebrating 15 years in operation this year.
The 1200 square-foot exhibit is filled with detailed scenery and buildings. It simulates an average small town of the 1950’s, including city streets and sidewalks, railroad crossings, a circus venue, Ferris wheel, drive-in movie theater, schools, churches, a fire station with firefighters (who have been attempting to extinguish a major building fire for 15 years) a replica potato shed and a machine shop. Visitors, who have signed in from every American state as well as many foreign countries, participate in a “scavenger” hunt, locating 50 of the most prominent features.
The present Caboose Club roster consists of 20 members, including a half dozen “snowbirds” who arrive regularly each fall and work until spring. The Club is always soliciting new members from among visitors to perform the regular equipment maintenance and operation of the 32 locomotives, half steam and half diesel. Model trains, whether Lionel, MTH or other popular “toy trains”, were never built to run the full schedule of 12 continuous hours required by the Caboose Club, so trains are rotated on a bi-weekly schedule. Foley’s Model Train Exhibit celebrates 15 years of operation