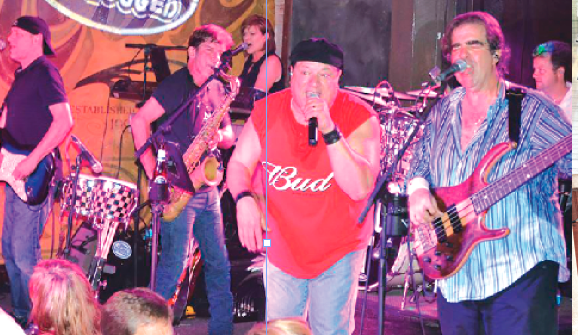 Party band Four Unplugged and their faithful followers, the Fourheads, are back at the Flora~Bama Lounge June 6-8. The tradition started almost 23 years ago and has grown bigger and better every year.
Despite the name, Four Unplugged now has six members and they are plugged in, but it all started with a vacation stop at the Flora~Bama by founding members, Ricky and Jan Windhorst. As they spent the day watching George Ridder and Lonnie Ferguson on the old patio and the Diving Ducks inside, they were inspired to form Four Unplugged.
But after the first two years, all that changed – except the name. Crowds got larger and fans wanted to dance. Bass, sax and drums were added. And eventually the band turned into the musical machine it is today.
“I like to say we call it Four Unplugged because we can’t count, but the truth is that when we started adding more people and instruments the name was so well known and respected that we couldn’t change it,” said founding member Ricky Windhorst.
For those wanting a taste of the start-up sound, the original four-piece lineup will reunite for an acoustic show on June 6 starting at 6 p.m. on the tent stage. Past band mates, Rick Samson and Dave Lemoine, will join Rick and Jan, with other guests expected to sit in. Like last year, this promises to be a special beginning to an amazing weekend.
The full band will play outside onJ une 7 at 10:30 p.m. and June 8 at 6 p.m. Opening for Four Unplugged on Friday will be Ricky’s old friend, Johnny Barbato and the Lucky Doggs. Saturday Four Unplugged will be followed by the Get Sideways Band.
Four Unplugged generally starts with a set list, but that usually goes off the tracks depending on the crowd after just a few songs. The group looks at each show as a new adventure and their job is to get the most out of it for the crowd and the band.
In fact, the band’s enthusiastic followers put on a show all their own all weekend. The Fourheads are the real party and the band is very appreciative of their support.
The band is not afraid to tackle any and all genres of music, and with a song list of several hundred songs they aspire to play two separate four-hour shows barely repeating a song.
“Our local fans see us all the time so we keep adding to and changing the set lists. We love having such a large and diverse list of songs to choose from. We’ve worked up a ton of new songs and plan on bringing back favorites from the band’s 23-year history,’’ Windhorst said. “All I know is get ready.
“It’s such a special place to play,’’ he added. “I know everyone says that. I’ve seen interviews with Kenny Chesney and other artists who say the same thing. I think it’s a blend of the vibe, the crowd, the history and the venue. Party music, the beach and the Flora~Bama, it just doesn’t get any better!”
The group consists of Louisiana Music Hall of Fame members Ricky and Jan Windhorst on vocals and keyboards respectively (Jan also sings). Randy Bidleman is on drums, with Kenny Schneider on guitars and vocals, Jimmy Belew is on saxophone, and newest member Craig Courtney handles the bass guitar and vocals.