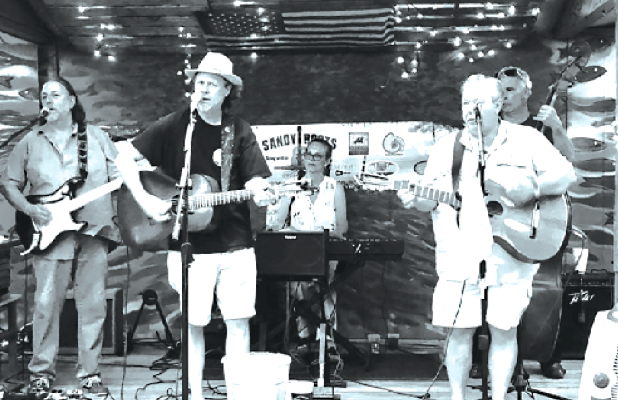 WSRE, located on the campus of Pensacola State College, invites the community to attend the production of three new StudioAmped shows featuring local country music artists and songwriters from the Frank Brown International Songwriters’ Festival in August.
Tony-Ray Thompson will take the Amos Studio stage on Monday, Aug. 5; The BeachBilly’s (pictured) will play Tuesday, Aug. 6; and songwriters Brittany Grimes, Davis Nix and Darrel Roberts will perform on Thursday, Aug. 8.
The shows are being presented in conjunction with the fall release of Ken Burns’ “Country Music” film series on PBS and in honor of the fest’s 35th anniversary. Doors open at 6 p.m. Shows begin at 7 p.m. at the WSRE Jean & Paul Amos Performance Studio at 1000 College Blvd. near the corner of College Blvd. and 12th Ave. in Pensacola. The Summer Country Concerts are free and open to the public. No tickets or registration required. Food donations for Manna Pantries are welcome and will be collected at the door.
• Tony-Ray Thompson says his singing and songwriting style is influenced by artists such as Eric Church, Alan Jackson and The Highwaymen super group of Johnny Cash, Waylon Jennings, Willie Nelson and Kris Kristofferson. His versatility in performing country, blues and Southern rock has made him a sought-after act on the Gulf Coast.
• The BeachBilly’s band includes accomplished local musicians T-Bone Montgomery, Dave Caluger, Mark Sherrill, James Daniel and Augie Savage. Montgomery was born in Muscle Shoals, and comes from a long line of songwriters, including his uncle, Peanutt Montgomery, who wrote hit songs for George Jones. Sherrill has written songs cut by Jones, Kenny Rogers, Johnny Cash, Tanya Tucker and Blake Shelton.
• Brittany Grimes is a country singer-songwriter from South Alabama. She fell in love with music and started writing songs at a young age. She has been performing at songwriters’ festivals and local music venues since age 13. At 14, she performed at Nashville’s CMA Fest, Tootsies Orchid Lounge, Rippy’s, Blue Bird Cafe and The Listening Room. By 15, she had taught herself to play guitar and began performing solo shows. She has written songs and shared the stage with many of her idols and mentors over the years. Her musical influences are widely spread among genres and include many Gulf Coast performers who have mentored her throughout her songwriting career. In June, she released a five-song EP of some of her favorite original songs produced by Brandon White and Greg Deluca.
• Davis Nix is an American alternative country music singer-songwriter from Montgomery. In 2018, he released the six-song EP, “Part One,” which garnered him national press in Rolling Stone’s article, “10 New Country Artists You Need to Know: October 2018.”
• Darrel Roberts was born and raised on the Gulf Coast and began writing songs at age 14. A family move to Texas exposed him to different forms of music and opportunities to play and write in different genres. He arrived at the Flora-Bama Lounge & Package Store in 1981 and discovered a place where artists were writing and playing good music with encouragement from the owner, Joe Gilchrist. “There couldn’t have been a better atmosphere for creativity anywhere on the planet. Joe also got some of the big writers to come down from Nashville, some real legends,’’ he said. “That became an avenue to network with some really great writers.” Roberts has performed at every Frank Brown Songwriters’ Festival.